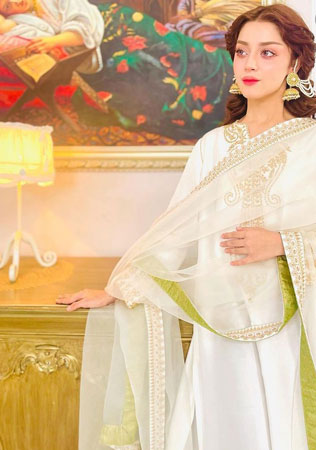 Pakistan showbiz actor Alizeh Shah shared a new picture gallery on social media which went viral. The ‘Dil Mom Ka Diya’ starlet took to her official account on the photo and video sharing application on Wednesday and shared a bunch of new pictures of herself on the feed, which went viral across social media platforms. Shah penned an Urdu phrase as the caption of the three-picture gallery on Instagram.

The now-viral pictures had the actor look pristine in an all-white look. Shah donned an exquisite white-gold outfit with matching jewels in the shoot, while, her makeup look was minimalist at its best, with tonged hair and tinted face.

The snaps shared by Shah on her Instagram handle garnered an immense response from her 4.1 million followers on the social site. The post was not only liked by over 46,000 social users, but several of them took to the comment section as well and dropped compliments for her.

Here is what her followers had to say:

Alizeh Shah enjoys a huge fanbase on social media and often posts glimpses of her professional projects as well as entertaining TikTok videos on the feed. On the work front, Shah has proven her mettle in TV as well as films within a short career span. Some of her notable performances include serials ‘Dil Mom Ka Diya’, ‘Mera Dil Mera Dushman’ and the telefilm ‘Chand Raat Aur Chandni’.