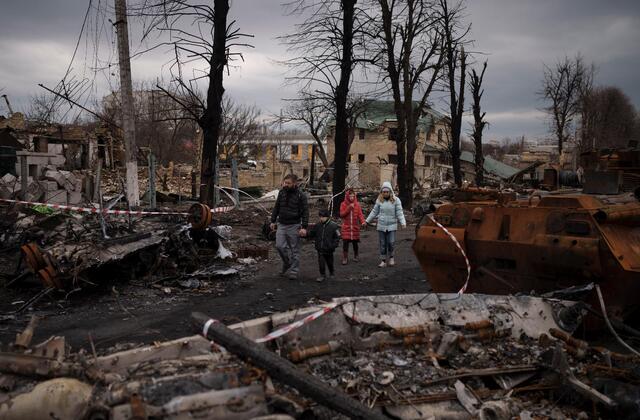 KYIV: Here are the latest developments in the war in Ukraine:

Russian strikes on the central Ukrainian region of Kyrovograd leave five people dead and injure more than two dozen others, the region’s governor says. Governor Andriy Raikovich says the strikes on the city of Kropyvnytskyi, about 300 kilometres (186 miles) south of the Ukrainian capital Kyiv, damaged two aircraft hangars. He said 12 servicemen were among the wounded. Over the weekend, Russia carried out strikes on the city’s railway infrastructure and a military airfield, leaving three dead, including a soldier, and nine servicemen injured, authorities said.

– US-Russia discuss prisoner swap – Moscow confirms it is in talks with Washington on a possible prisoner swap but says there is no concrete agreement “yet” on a deal that reportedly involves trading a notorious Russian gun runner for a US basketball star and a former Marine. US Secretary of State Antony Blinken says Washington has made a “substantial proposal” to Moscow to free basketball star Brittney Griner and former Marine Paul Whelan. He declines to confirm reports the US is offering to trade them for Russian arms trafficker Victor Bout. Blinken says he will speak to his Russian counterpart Sergei Lavrov “in the coming days” — in what would be their first telephone call since Moscow sent troops to Ukraine on February 24.

Britain’s military intelligence says Ukraine’s counter-offensive in the occupied southern Kherson region near the Crimea peninsula is “gathering momentum.” Russian forces “should leave Kherson while it is still possible. There may not be a third warning,” Ukrainian presidential advisor Mykhaylo Podolyak says on Twitter. Earlier this week, Ukrainian forces used new long-range weapons to damage a key bridge into the city of Kherson, one of the first to fall to Russian forces in the early days of the war. Britain’s defence ministry says that Kherson city is now “virtually cut off from the other occupied territories.”

Russian journalist Marina Ovsyannikova, who shot to global prominence in March after interrupting a Russian TV broadcast to denounce the invasion of Ukraine, is ordered to pay a fine for “discrediting” the Russian army. A district court in Moscow orders Ovsyannikova, a former editor at state-controlled Channel One, to pay a fine of 50,000 rubles (around $800). Ovsyannikova famously barged onto the set of Channel One’s evening news programme in the early days of the war, holding a sign reading “No War” in English. She was detained but spared punishment and left Russia for a few months before returning this month and being detained again for speaking out in defence of jailed opposition politician Ilya Yashin. Her lawyer said she was fined over that incident, and not her TV outburst.

Ukrainian President Volodymyr Zelensky announces plans to boost Ukrainian electricity supplies to European consumers to help it avert an energy crisis sparked by a gas war with Russia. “Our export not only allows us to generate foreign currency revenues, but also help our partners withstand the energy pressure from Russia,” Zelensky says in his daily address to the nation. Russia’s Gazprom this week cut gas deliveries to Europe through the Nord Stream pipeline to about 20 percent of capacity.