Sanaullah warns of governor’s rule if entry in Punjab banned 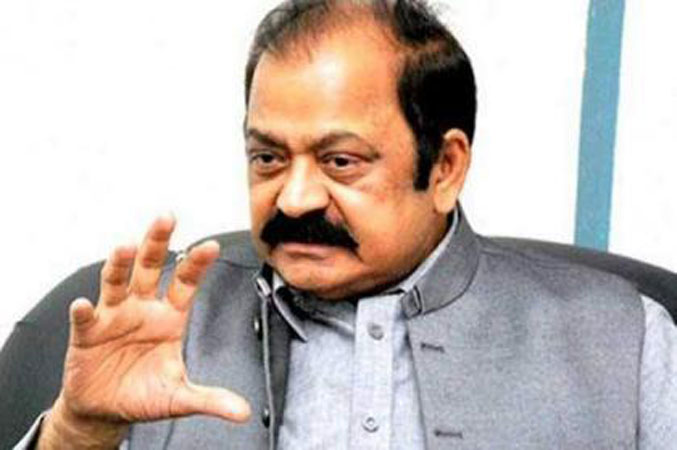 Interior Minister Rana Sanaullah Wednesday warned that governor’s rule will be imposed in Punjab if he was barred from entering the province. Addressing a press conference in Islamabad, Sana said he had already begun drafting a summary for imposition of governor’s rule, which was moved by the interior ministry, as opposition leaders were threatening that his entry to the province will be banned. “If my entry is restricted, it will be grounds for governor’s rule,” he asserted. Sana’s statement came hours after PML-Q’s Chaudhry Pervaiz Elahi was sworn in as the Punjab chief minister. Sana said the SC’s decision had “created complications and destabilized the political situation” because of which the rupee was tanking and the stock market was falling. Even a second-grader would interpret Article 63-A – which is related to the disqualification of lawmakers over defection – as saying that the votes of dissident lawmakers would be counted in the election, he claimed. He further said the SC’s recent verdict contradicted the Election Commission of Pakistan’s (ECP) decision to de-seat 25 dissident PTI lawmakers who had voted for Hamza in the April 16 election, which was, in turn, based on an order of the apex court. The ECP’s verdict had been based on MPAs not following the instructions of the party head whereas the SC had stated the parliamentary party head’s instructions should be followed, he stated. He said Hamza should have remained the chief minister since the votes of those 25 dissident lawmakers would not be subtracted from his tally in the April election. “It is my opinion that the interpretation of Article 63-A will not sustain. Any lawyer will say it amounts to rewriting the Constitution. It is not the SC’s authority to rewrite the Constitution and we will defend the parliament’s authority,” Sanaullah said. “This situation is unfortunate and we want to restrict our words […] An independent, uncontroversial and impartial judiciary is any country’s basic need. No country can progress without it.” The interior minister said that the incumbent government did not seek to curb the judiciary’s authority but wanted to “regulate” it. If the chief justice took suo motu notice and formed benches in consensus with the advice of fellow jurists, then letters like the one circulating since yesterday would not happen, he said, while referring to the one written by Justice Qazi Faez Isa to the Judicial Commission of Pakistan.

In response to a question about whether the PML-N-led coalition government in the Centre would find it difficult to rule now as they no longer had control of Punjab, Sanaullah said: “The federal government has its own role. It is present everywhere. It has so many departments and their resources and budgets are bigger than provincial departments. This kind of conversation is being done by people who neither have intelligence nor knowledge.

“The federal government is a coalition government and it is present everywhere,” he emphasised. In response to a question of what the government would do if PTI Chairman Imran Khan decided to hold another long march to Islamabad, Sanaullah said they should remember the incidents of May 25 – the last time the former ruling party had done a long march to the capital, which was marked by violence. “If he (Imran) tries to mount [a protest] from Punjab or Khyber Pakhtunkhwa, we will stop them there and if the police do not stop them, we will do it ourselves.

They should not think they will find empty roads and will be facilitated while coming towards Islamabad.” In response to another question about PML-N supremo Nawaz Sharif’s return, the interior minister said not only would Nawaz come back to Pakistan, but he would also lead the party’s campaign in the next general elections. Sana said no institution sans the parliament had the powers to amend and rewrite the Constitution.

“We will not only fully protect this power of the parliament at all costs, but also not allow any other institution to amend or rewrite the Constitution,” he said while addressing a press conference.

Ruling out the impression of any attempt to curtail the powers of judiciary, the minister said an “independent, impartial and unbiased” judiciary was the basic need of every society and no country could make progress without it. It was also imperative for all citizens to respect the judiciary, he added.

To another question, he said after the success of no-confidence motion against former prime minister Imran Khan, the PML-N wanted to go for early election but the coalition partners opposed the idea. The latter were of the view that the country might go bankrupt if a caretaker set-up was installed at the critical time, he added.

Prime Minister Shehbaz Sharif took over the responsibility and saved the country from bankruptcy, he added.

To a query, the minister said the government would not frame corruption cases against anyone, rather it was the responsibility of National Accountability Bureau (NAB) to file reference with courts after complete inquiry.

An independent person was heading the institution and the government would not interfere in its affairs, he added. The corruption cases of Farah Gogi were also with the Anti-Corruption Department and NAB, he added. The minister warned the opposition that if they tried to march towards the capital again, they would be dealt with sternly and there might be the repeat of May 25 events.