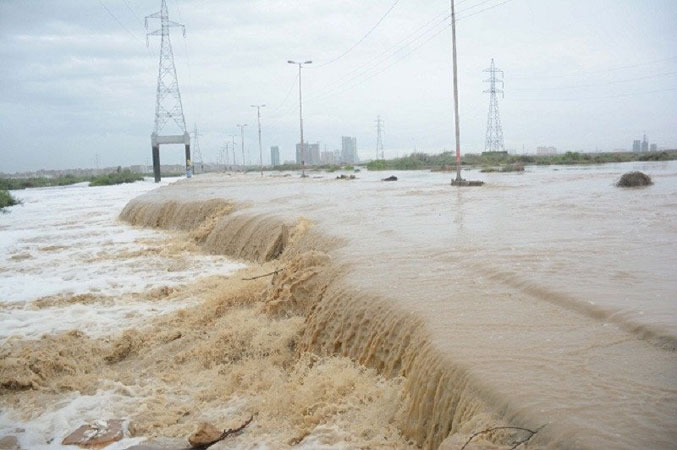 According to the Provincial Disaster Management Authority (PDMA), 34 children and 30 women are also among the dead. Director-General PDMA Naseer Ahmed Nasar said the government has paid compensation to the heirs of 75 flood victims. Meanwhile, a large number of people, including women and children, were stranded in flood waters in Lasbela district.

As the third spell of the monsoon rains lashed the province, flash floods demolished roads and bridges, including the one connecting Balochistan with Sindh on Monday. The floods have also washed away various portions of the Quetta-Karachi highway. This has caused the suspension of traffic between the two cities. “We will try to reopen the traffic after 24 hours,” Commissioner Kalat Divison Dawood Khilji said as passengers and travellers remained among the worst-hit on the national highway.

Floods and torrential rains also damaged standing crops in Barkhan, Kohlu, Naseerabad, Pishin, Jaffarabad, and other parts of the province. “Recent rains have inflicted huge financial losses on growers and farmers,” Syed Abdul Qahar Agha, the central leader of Balochistan Zamindar Action Committee, claimed. He demanded of the provincial government to announce a special relief package for the farmers of the province.

Meanwhile, the Pakistan Meteorological Department (PMD) on Wednesday forecasted more rains for Sindh, including Karachi, from Wednesday till Friday.

“The low-pressure area causing widespread heavy rains in Sindh has moved westward, towards the Oman coast. The low over Rajasthan, India now lies over northwest Rajasthan and adjoining northeast Sindh,” it said in a statement. Under the current weather system, rain, accompanied by thunderstorms along with isolated heavy falls, would likely continue in Nawabshah, Khairpur, Sukkur, Larkana, Jacobabad, Dadu, Jamshoro, Shikarpur, Qambar Shahdadkot, Ghotki and Kashmore over the next two to three days.

In its weather forecast for Karachi, the PMD stated that the minimum temperature in the metropolis over the next three days would remain between 26-28 degrees Celsius while the maximum temperature would range between 28-32°C.

According to the PMD, the weather in the city would remain cloudy with intermittent rain. On July Thursday and Friday, Karachi would see partly cloudy weather and there were chances of light rain, it added.

It warned, however, that the persistent heavy spell over Khuzdar, Lasbela Hub and along the Kirthar Range may create pressure on the Hub Dam and cause flash floods in Jamshoro and Dadu.

The latest spell of rain, which continued on Wednesday for the fourth consecutive day, has wreaked havoc on the country’s financial capital, with several dead and many areas flooded.

At least eight people lost their lives in rain-related incidents in Sindh on Tuesday, including five in Karachi. Three more rain-related deaths were reported on Wednesday, taking the toll this week to eight in Karachi and 11 overall.

According to a statement from Karachi police, a 42-year-old man was electrocuted in his home in the city’s Jubilee Chowk area.

In two separate incidents, a body of a drowned man, aged between 30 and 32, was recovered from the Lyari river, and the body of a man in his early 30s was found floating in the river near Imtiaz Superstore. Earlier, a tragedy befell a family in Sindh’s Khairpur district where a man died, along with his two minor sons, while his wife and two daughters suffered critical injuries when the roof of their house collapsed during heavy rain in the Gambat area near Ranipur late on Monday night. In Karachi, five people lost their lives as several areas of the city remained inundated in sewage-laced rainwater for a third-consecutive day.

Separately, at least 300 people, including women and children, on Tuesday awaited rescue in the Oraki region of Lasbela district after floods inundated the villages in the area and washed away mud houses, forcing people to live under the open sky.

Despite a passage of 24 hours, the local administration was not able to rescue the stranded people who were said to be running out of food and fresh water.

The PMD has also predicted another spell of countrywide rains from July 27 due to penetration of “monsoon currents”, which it said are expected to intensify in upper and central parts of the country.

“The weather system will persist till July 31,” the Met office said.