* Held at Arts Council, Karachi, Day 1 of the workshop by Sezen Can, gave exclusive tips and live demonstrations on how to apply trauma makeup 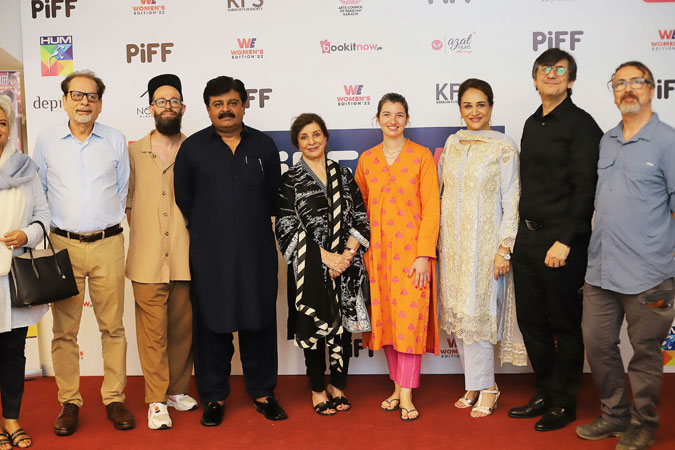 Special effects makeup is an integral part of modern cinema. It is not just used to create aliens and monsters but to build a realistic character that the audience can connect to and believe. Keeping in the mind the importance of SFX makeup in film and television and limited options available locally, The Karachi Film Society organised a two-day film and television SFX makeup workshop with Turkish experts Murat Polat and Sezen Can who flew from Türkiye. The workshop was part of the 3rd Pakistan International Film Festival Women’s Edition 2021, which was postponed due to the Covid19 lockdown internationally. PiFF Women’s Edition hosted a series of insightful, engaging, interactive and educational panel discussions and seminars/webinars on various topics, celebrating the tremendous achievements of women in Pakistan’s entertainment industry.

Held at Arts Council, Karachi, day one of the workshop by Sezen Can, a specialist in beauty on screen and in the fashion industry with experience of working in popular movies such as The Big Flight, Never Leave Me and Aile Arasinda gave exclusive tips and live demonstrations on how to apply trauma makeup, the different stages and aging techniques of SFX makeup. Day two of the workshop featured Murat Polat, a specialist in SFX makeup with experience of working in over 500 projects including popular Netflix series The Protector and Turkish original Alev Alev. He introduced the attendees to the different types of trauma makeup kits, sculpting techniques, different lighting setups, wound applications, transfer techniques and how to add depth to various applications with makeup via live demonstrations and exclusive tips.

The workshop was supported and attended by makeup experts Kamal Uddin Ahmed, Masarrat Misbah, Angie Marshall and aspiring makeup artists who appreciated the efforts of KFS for organising such an educational workshop. The workshops were broadcast live on PiFF’s official social media pages for those who couldn’t join due to the current monsoon spell in Karachi.

President KFS Sultana Siddiqui in her concluding speech thanked the Turkish guests, President Arts Council Mohammad Ahmed Shah, Provincial Minister of Sindh for Culture, Tourism and Antiquities Syed Sardar Ali Shah and the attendees for their support in making the two-day workshop a huge success. She also highlighted the importance of organizing such educational workshops to train the talent of Pakistan. Provincial Minister Syed Sardar Ali Shah in his speech appreciated the efforts of KFS and extended the provincial government’s support to KFS’s vision of improving technical skills of aspiring young talent in different categories of cinema and films.