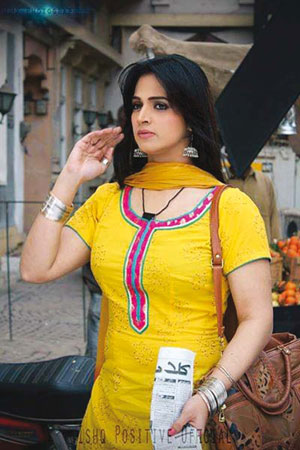 The much-anticipated Lollywood film was released in European and Gulf countries on the eve of Eidul Azha and its leading cast includes Humayun Saeed, Mehwish Hayat, Kubra Khan and Vasay Chaudhry.

The film has been directed by Nadeem Baig, who is a frequent collaborator with Saeed. In the movie, Saeed’s character Jamal goes to London to chase after Mehwish’s character in the film to bring her back to Pakistan as his bride.

Taking to Instagram story section, Noor Bukhari praised Kubra Khan for her acting skills as she wrote: “I love her she is so pretty and her acting”.

She also appreciated Nadeem Baig for his best direction and cinematography but she feels the love story did not go well with Humayun Saeed’s age.

Calling the movie story “extremely weak”, Bukhari said that the 51-year-old actor should now take up some mature roles.

In another comment, she attempted to clarify her comments, stating that Humayun Saeed is her favourite.

“…he looked superb but I feel he can do much more than just be a romantic hero,” she added.