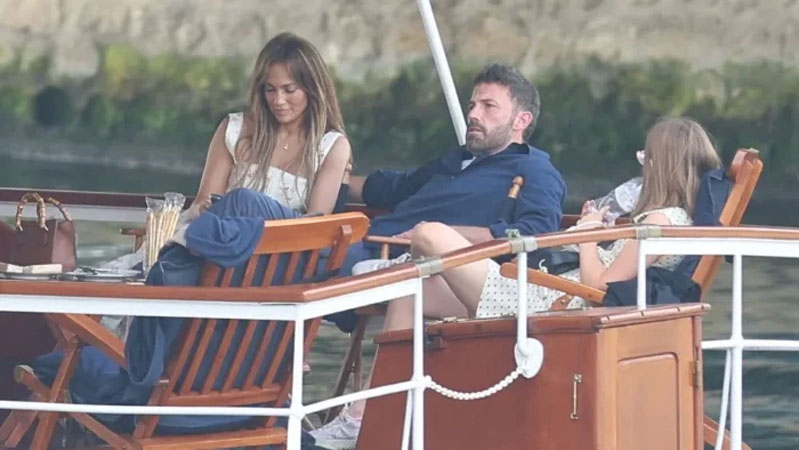 Married life can be exhausting-just ask Ben Affleck. One week after tying the knot with Jennifer Lopez, the actor was snapped looking extra sleepy on a boat-ride in Paris, where the two have been vacationing with their family.

In the photographs, taken July 23, Ben appeared to be taking a nap as he cruised around the city’s Seine River. Along with his wife, the Justice League star was joined by his kids Violet, 16, and Seraphina, 13-who he shares with ex Jennifer Garner and JLo’s 14-year-old twins Max and Emme-who she shares with ex Marc Anthony.

The newlyweds-who married in Las Vegas on July 16 three months after the pair got engaged-touched down in Paris earlier this week. While an eyewitness exclusively tells E! News that Jennifer was in France for work-related reasons, it didn’t stop the blended family from taking in some of the city’s best sites and packing on the PDA.

An eyewitness shared with E! News that Jennifer, 52, Ben, 49, Emme and Seraphina were spotted at the shops in the Marais on July 22.

The eyewitness also noted that they also visited the Musée d’Orsay and the gardens near the Élysée Palace where the couple “snuck away for some alone time.”

A separate eyewitness, who saw the couple during their trip to the Musée d’Orsay, also observed how in love they looked, adding that Jennifer “was glowing.”

On July 17, Jennifer shared the news with her fans that her and Ben had gotten married-two decades after they first dated-and reflected on the special day

“Love is beautiful,” she wrote in her newsletter. “Love is kind. And it turns out love is patient. Twenty years’ patient. Exactly what we wanted.”