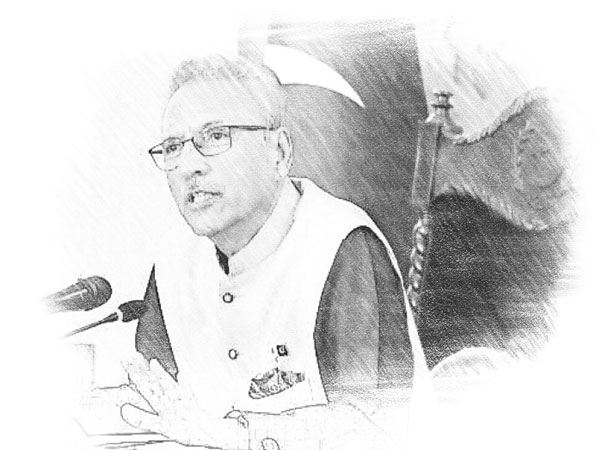 President Dr Arif Alvi Tuesday offered to play his role for a national dialogue to end crisis if all the stakeholders agree to it.

Talking to the reporters in Islamabad, President Alvi praised Foreign Minister Bilawal Bhutto Zardari for his efforts for rapprochement with the US and said even ex-prime minister Imran Khan always talked about good relations with the country. However, he added that the ex-premier only said ‘Absolutely Not’ on giving bases to the US.

The president emphasized pursuing a non-confrontational foreign policy by the country and establishing good friendly and mutually beneficial relations with all countries of the world based on equality and dignity and pursuing peace throughout the world. He added that past policies of the country to completely align with one block did not go well with the interests of the country.

President Alvi rubbished the perception that his relations with Prime Minister Shehbaz Sharif were not cordial, saying that such an impression was “wrong”. He said he had received 74 summaries from the incumbent government, of which he had signed and sent back 69.

Alvi said he had held back summaries relating to the Punjab governor, overseas voting rights, electronic voting machines (EVM) and changes in the National Accountability Bureau’s (NAB) laws, says a news report. He said he had not discussed the changes in the NAB or EVM laws with PTI Chairman Imran Khan and his last correspondence with him was on the issue of Punjab’s governor.

Alvi said that he had good relations with the prime minister and had several meetings with him too. “I signed 69 of 74 summaries sent by the current government,” he contended. The president said he had to leave for Hajj but extended his stay in the country for approval of the
Finance Bill 2022-2023 by the Parliament, so he could sign it.

However, regarding the bill blocking the use of electronic voting machines (EVMs) in the elections, President Alvi said that he vouched for the use of the device and asked how he could sign that bill.

He claimed of stopping several bills of the PTI government as well but added that the issues were amicably resolved only through verbal communication. To a question, the president said that he doesn’t say that there was a conspiracy against the PTI government to oust Imran Khan from power but the allegations he leveled must be probed.

“The world history is a witness that it takes ages for a conspiracy to be unveiled.” When questioned about the political situation in the country, he said he did not have the authority to tell anyone to engage or hold a dialogue. However, he did say that “the President House is ready to play its role [for reconciliation] if all parties agree.” The parliamentary system in the country has been running for the last 73 years and its flaws should be rectified, the president said and added that there could be defects in the presidential form of government as well, but there was nothing wrong in deliberation on it.

To a question that a Supreme Court judge had suggested invoking Article 6 against him, President Alvi expressed that everything in the country was labeled as a violation of the Constitution. The president said that he must be tried under Article 6 if he has violated the Constitution. The president said he had no objection to the early appointment of the new army chief.

Asked if the army could play a role amid the current political quagmire in the country, he said: “There is no constitutional role for the army in the country [for resolving political crisis].” The president said as an uncertain political and economic situation in any country can expand polarization in society which was detrimental to everyone’s interest, therefore, all stakeholders should take meaningful steps to bring about political and economic stability through a consultative process while remaining within the bounds of the Constitution and relevant laws of the country.

He said that all pillars of the state and institutions should play their constitutional role while remaining within the bounds of law for holding free and fair elections, whenever held, to pave the path for the setting up a government which truly reflected the aspirations and hopes of the people of Pakistan.

“Only a government that comes to power through transparent, free and fair elections can provide much-needed political, financial and economic stability to the country”, he said according to a press release issued here by the President’s Media Wing.

The president denied violating the Constitution or betraying the country, but acknowledged that the proceedings under Article 6 of the Constitution should definitely be initiated against traitors. Referring to the cablegate crisis, Alvi said he believed that a “clear mandate” for governance was very important and the results of any investigation on the diplomatic cable – at the centre of the crisis – should be brought before the public.