* Anthony and Joe Russo who are also co-producers of the film, bring a screenplay written by the latter with Christopher Markus and Stephen McFeely 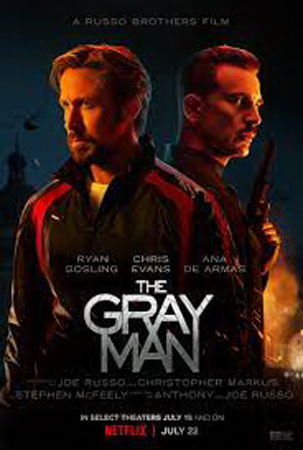 Unabashed escapist fare studded with stars who seem to be having a blast Chris Evans, cast as a hammy villain who will stop at nothing to have his way, says as much with all the cockiness at his command – The Gray Man isn’t big on psychological nuance or character development. It doesn’t, however, hold back when it comes to the action set pieces. Buoyant and brassy, they are staged with aplomb.

With the actors getting into the swing of things and letting the pace of the film dictate the performances, star power propels The Gray Man through a string of explosions and fight sequences, one of which pits Dhanush against Ryan Gosling and Ana de Armas and delivers our money’s worth.

When Gosling and Evans go toe to toe in a battle of attrition that leads all the way up to the final face-off, the confrontations add up to a great deal of fun, if only of a superficial, visceral kind. The flashy action choreography does bear the signature of the Russo brothers but The Gray Man, the most expensive film that Netflix has ever bankrolled, is appreciably undermined by a rather rudimentary spy movie plot.

Anthony and Joe Russo, who are also co-producers of the film, bring a screenplay written by the latter with Christopher Markus and Stephen McFeely to the screen in a directorial style that banks heavily on explosions, chases and thrills. No sooner does one action sequence run its course than the ground is quickly cleared for the next one with an eye on delivering non-stop excitement.

Should we be complaining? Anything that is incessant and excessive faces the risk of falling into a rut. That is precisely what happens in The Gray Man. “You have no time to think,” Gosling’s character, a CIA dark operative endowed with “preternatural” survival skills, is told by his erstwhile boss in one scene. Neither does the audience. The Gray Man has no space for contemplative pauses – that isn’t the game that the film is interested in.

The Gray Man is adapted from Mark Greaney’s 2009 novel of the same name. The author has published ten more books since then. So, this is only the start of a franchise. The Russo brothers, who have phenomenal success under their belt with their MCU movies, struggle a touch to replicate the panache that they brought to bear upon their Captain America and Avengers outings.

The Gray Man may not be the greatest way to kick off a proposed series of action films, it certainly contains the seeds of better, brighter things, especially for Dhanush, who plays Lone Wolf.

Although the focus is squarely on Gosling and Evans, The Gray Man does not short change the supporting actors. Brazilian star Wagner Moura, cast as a mercenary in Vienna is working for faceless, also pulls his weight in a crucial cameo. As does Jessica Henwick, playing a CIA operative in the crosshairs of her higher-ups.

In 2003, Courtland Gentry (Gosling), incarcerated in Florida State Prison, is offered freedom by CIA boss Donald Fitzroy (Billy Bob Thornton) if he agrees to work for a shadowy programme called Sierra. “I am here to help you become a value add rather than a value lost,” the spy agency chief says. The young man accepts the life-altering proposal. A man without an identity and bereft of family attachments, he operates in complete secrecy. He comes to be known simply as Sierra Six.

Nearly two decades on, Fitzroy’s successor at the helm of CIA, Denny Carmichael (Rege-Jean Page), orders Six to take out a troublesome man in Bangkok. In the course of the mission, he stumbles upon sensitive information that his boss in DC wants to suppress at all cost. Six goes rogue. Denny hires the sociopathic agent-turned-mercenary Lloyd Hensen (Evans) to hunt down the fugitive.

A standard spy movie set-up sends Six and Lloyd across the globe in a continual and tangled cat-and-mouse game that requires the former to tap his exceptional acumen and draw on the support of a young female agent Dani Miranda (Ana de Armas, a bit undone by an underwritten role), who is determined to make a career for herself in the agency but not at the cost of her principles.

Recruited in the first place because he has the makings of a nameless assassin with limited morality, Six reveals his human side by developing a bond with Claire (Julia Butters), Fitzroy’s niece, which gives him a personal purpose of the kind that he has never had in 18 years of working for the CIA.

In one of the action highlights of The Gray Man, Six, handcuffed to a bench in Prague, takes on Lloyd’s men and a belligerent posse of policemen. It is the kind of high-octane, in-your-face passage that lifts the film appreciably when all else seems to be falling prey to the law of diminishing returns. The film is peppered with numerous such stunts but not all of them work quite as well.

The relentless pyrotechnics that accompany Sierra Six’s feats and the amazing escapes that he pulls off are unable to fully paper over the storytelling slip-ups and unremarkable narrative devices in The Gray Man. For one, the film flits from one place to another (Bangkok, Hong Kong, London, Vienna, Prague, Baku, Monaco, Turkey, Croatia, one new location every ten minutes or so in a two-hour film) at a pace too dizzying to allow for easy comprehension.

The Gray Man promises and tries to give us the whole world but falls short by many a mile. But watching Ryan Gosling, who has mastered the art of moving from arthouse films to tentpole productions with effort to spare The two sides having a go at each other has its charm. Sadly, the broad sweeps and the absence of greys in their showdowns take some of the sheen away.