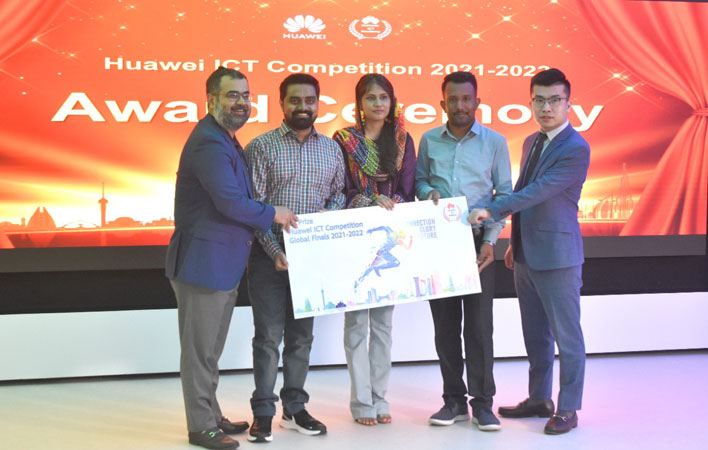 Huawei Pakistan held an award ceremony for the winners of the Sixth Huawei ICT Competition 2021-2022 Global Final that took place in Shenzhen and drew to a close on June 25th. The award ceremony was attended by Pakistan’s First Prize winning team consisting of; Sateesh Kumar, Iqra Fatima, and Bhagchand Meghwar, also in attendance was Deputy CEO Huawei Pakistan, Mr. Ahmed Bilal Masud and Public Relations Director Mr. Wu Han. During the ceremony, the team was awarded the first prize of 20,000 USD, along with mobile phones for each participant.

The competition attracted 150,000 hopeful students from more than 2000 universities in 85 countries and regions around the world. After making it through the national and regional competitions, 130 teams from 43 countries and regions faced off in the global final. Pakistan’s team one, and team two; Hafiz Rizwan, Adnan Ali, and Mukhtar Memon participated in the Network Category of the Practice competition with Pakistan Team One clinching the 1st prize, and Pakistan Team Two grabbing the 3rd prize. In the Innovation Competition, two further teams from Pakistan participated; Osman Ahsan Sheikh, Muhammad Abdullah Ahsan Sheikh and Aqsa Amir represented team ‘Homevism’, comprised of students from NUST. The second team, ‘Boltay Haroof’, from LUMS consisted of Umer Farooq, Tabish Rafiq and Areej. In the Innovation competition, Team Boltay Haroof won the 2nd prize, while Team Homevism were awarded the 3rd prize. Star student of the winning team, Mr. Bhagchand, stated at the ceremony, “The Huawei ICT Competition served as a platform that allowed us to compete with and win against teams at a regional and international level for Pakistan.”

Team member, Iqra Fatima gave her comments about her experience, “After competing in different rounds, I qualified into the top six, after which our team was able to qualify the Regional final as well as the Global final with the first position.” Sateesh Kumar stated, “I belong to a small town in Sindh, and did my bachelors from Mehran University. I heard about the Huawei ICT Competition through my teacher who motivated me to take part in the competition. This is an amazing initiative by Huawei, giving equal opportunities to engineering students from all over Pakistan to showcase their talent, whether they’re from large bustling cities or small remote towns.”

Deputy CEO Huawei Pakistan congratulated the winners, “From the bottom of my heart, I congratulate every participant for their success in this competition. This has been the beginning of a great opportunity for you, and you have all walked away from this event with a deeper understanding of ICT and the potential to make a name for yourselves in the ICT industry.” The competition has always been well received in Pakistan as it promotes innovation and creativity while serving as a link between the classroom and the professional workplace. By nurturing university students’ talent in Pakistan, it also contributes to increasing national ICT competitiveness while enhancing digital transformation efforts.

The next installation of the global event, The Huawei ICT Competition 2022, will be held under the theme ‘Connectivity, Honor, Future’, and will run from August to December, and is larger part of Huawei’s commitment towards nurturing the next generation of ICT leaders across the world. The competition will welcome thousands of more undergraduate students from countries all across the Middle East. Winners of the regional competitions will receive a certification, future learning opportunities, a USD 20,000 cash prize and more.