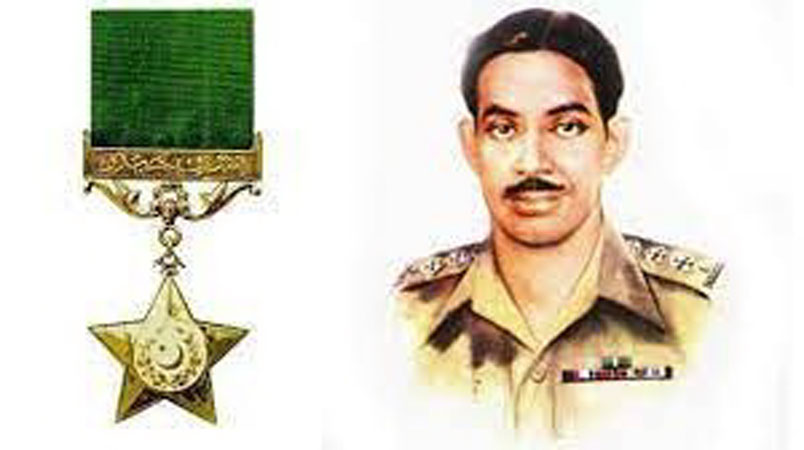 Capt Muhammad Sarwar, the veteran hero of Pakistan Army, who was martyred for his courage and bravery while cultivating the homeland with his blood, and who was awarded Nishan-e-Haider, the first and highest military honor of Pakistan. The valleys of Kashmir are still witness to, how Captain Muhammad Sarwar fought till the last drop of his blood. He looked the enemy in the eye and told him that for this land he can shed blood and defeat the enemy. Captain Sarwar ensured the defence of the country by sacrificing his life.

He was commissioned in the Punjab Regiment in 1944, after which he participated in World War – II and was promoted to the rank of captain in 1946 for his outstanding Military service. In 1948 he was serving as a company commander in the second Battalion of the Punjab Regiment when he was assigned to an operation in Kashmir.

At the time of establishment of Pakistan, only Punjab regiment was an organized and active regiment. 2 Punjab Regiment was ordered to go to Kashmir. Captain Muhammad Sarwar takes the initiative and by virtue of his experience and ability, he thought that he must go to war and in this regard he started putting his efforts to be part of frontline troops. The Commanding Officer knew that it was not an easy battle, but he promised Captain Muhammad Sarwar that after few days he will be part of frontline troops.

The morning sun saw the green crescent flag of Pakistan fluttering on this hill. He was awarded the Nishan-e-Haider for creating an unparalleled history of bravery, an honor his widow received on 3 january 1961 at the hands of the President of Pakistan, Muhammad Ayub Khan. Captain Muhammad sarwar Shaheed showed great bravery and courage to defend the motherhood.

After his martyrdom, General Ayub Khan said in his address: “I feel proud to mention the sacrifice of Captain Mohammad Sarwar Shaheed, who has added a new chapter in the history of Pakistan by being the first to receive the Nishan-e-Haider. By giving a great sacrifice, he made the name of himself, his army and his Unit alive forever. Indeed, we all are proud of his sacrifice. Let us all pledge to remember this golden feat forever and Will keep it fresh.”

General Tikka Khan writes: “The entire nation pays tribute to Sarwar Shaheed’s magnificent feat. His feat will be written in golden letters in the history of the Pakistan Army.”

His long-time companion Major Afzal says: “I feel as if Sarwar Shaheed has just passed by me and advised me to pray for the defeat of the enemy and his martyrdom. I remember that time.” His life was ideal. He always wake up early in the morning to pray and wake me up forcibly. I would call him Maulvi and he would stop me and ask me to call him a martyr.”

Captain Sarwar Shaheed who fought against external enemies for the sake of motherland, is a shining example of bravery for the soldiers of Pakistan Army who are fighting against terrorists and internal challenges today. Today, the entire nation pays homage to the martyred Captain Muhammad Sarwa, who gave stories of bravery and courage in the Kashmir was of 1948.