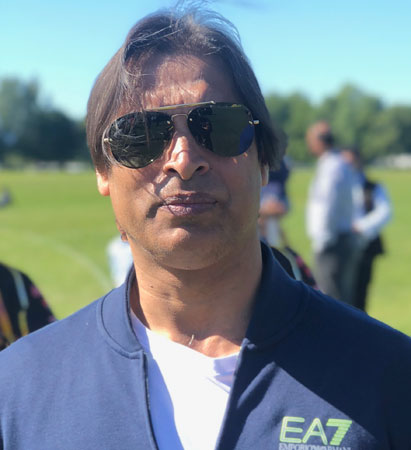 A highly anticipated biopic on Pakistan cricket legend and the world’s fastest bowler Shoaib Akhtar has finally got the green signal.

Dubai-based filmmaker Faraz Qaiser and production house QFilm Productions are bringing this larger-than-life story of the famous cricketer to life.

The film aptly titled “Rawalpindi Express” is derived from Shoaib Akhtar’s nickname in the cricketing world since he hails from Rawalpindi, Pakistan and is known to have bowled the fastest delivery.

The film is set to have a worldwide release on November 16, 2023. The date is a tribute to the fastest ball ever bowled by the iconic speedster at the speed of 161.3 km/ph during a 2003 World Cup group match against England.

This is the first ever biopic being made on a bowler on such an international scale, shoot locations for which have been finalised in UAE, Pakistan and Australia.

Faraz Qaiser, director of “Rawalpindi Express”, who has spent five years researching the extraordinary life journey of Shoaib Akhtar from a small town cricketer to an international superstar sportsperson, believes that what the world knows about the legend is just the tip of the iceberg; in reality it’s a beautiful story of perseverance, struggle and passion that needs to be told.

“The world knows Shoaib Akhtar for his lethal pace and toe crushing Yorkers, on the field he has rattled some of the best batsmen. I have been an ardent fan and follower since childhood and have a vivid memory of sitting on my father’s shoulder to catch the star in action. The idea to make a biopic came from my father and it actually seeped in my mind after I got inspired from Akhtar’ s journey that he described in one of the interviews on TV. It’s a vision, a dream, a passionate tale that has grown every day in last 5 years.”

Qaiser added, “I met Shoaib Akhtar in February 2020 to present my idea along with my father Qaiser Nawaz who is also the writer of the film. After extensive discussions he finally agreed and gave the go ahead for the project. He spent more than a week with us narrating his journey and it was fabulous to know him so up close and personal. We also got lot of inputs from people close to him. We are really grateful to everyone who has contributed in helping us realise our dream.”

The star cast for the film is yet to be finalised, though it is expected to be bigger names from Pakistan and Western countries.