Verdicts must speak for themselves: Fazl 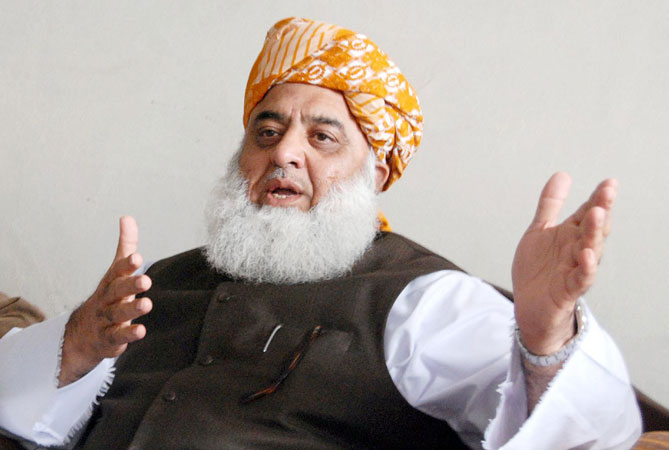 Pakistan Democratic Movement (PDM) chief Fazlur Rehman Monday said the coalition government desired a full court bench on the Punjab Chief Minister’s election case. Addressing a joint press conference of the ruling alliance in Islamabad, he said formation of full court bench was demand of the justice and there should not be any controversy in its verdicts in the best interest of the country. Seconding Pakistan Muslim League – Nawaz Vice President Maryam Nawaz and PPP Chairman Bilawal Bhutto’s views, Fazl said the government wanted to fortify the judiciary but the decisions should speak themselves. He said fingers were being pointed at the judiciary, reports APP. He said the incumbent government given mandate by the people was not being allowed to function properly. He said the people’s confidence in the country’s institutions needed to be restored but the latter should also assess their role and hold themselves accountable as well. The PDM chief said, “We want to make country economically stable. We all are on one page to set the economy on the right track but let us do it.”

Responding to a query, he said the country was facing serious economic crisis due to the previous regime’s bad go vernance but the coalition government saved it from bankruptcy and brought it on the road to progress. Fazl said he does not expect justice from the current bench – headed by Chief Justice Umar Ata Bandial, and comprising Justice Ijaz Ul Ahsan and Justice Munib Akhtar. “That’s the reason we have been demanding a full bench to hear the case so that justice can be ensured,” Fazl said, adding that the more consensus there is, the more we hope the decision will be on merit. He said that a government given the mandate by the people was not being allowed to function. He said when a government was not formed as per the will of the country’s institutions, a new setup was imposed through rigging.

“Institutions meddle in political affairs to protect the state but do they ever think that the state is weakened due to their interference?” he asked. “You are sitting behind a wall. You may decide whatever you want […] and make politicians the culprit in the eyes of the public and defame them. But hold yourself accountable.” “Don’t take this nation to a point where people rebel against institutions,” he said.

He said that the people’s confidence in the country’s institutions needed to be restored but the latter should also assess their role and hold themselves accountable. “We want to make country’s future brighter but for that, stability for the government is important […] We are united on the fact that we have to set the economy right but let us do it.” The JUI-F said that it was very easy to “create difficulties”. “If you expect us to not create any difficulties for you, then it is also your obligation to not create difficulties for us […] if there’s support for parliament, institutions and the government, the country will stabilize.”