Wolf’s Lair — the bunker where Hitler planned war and genocide

* During the Second World War, the dictator passed around 830 days in the bunkers at Wolf's Lair 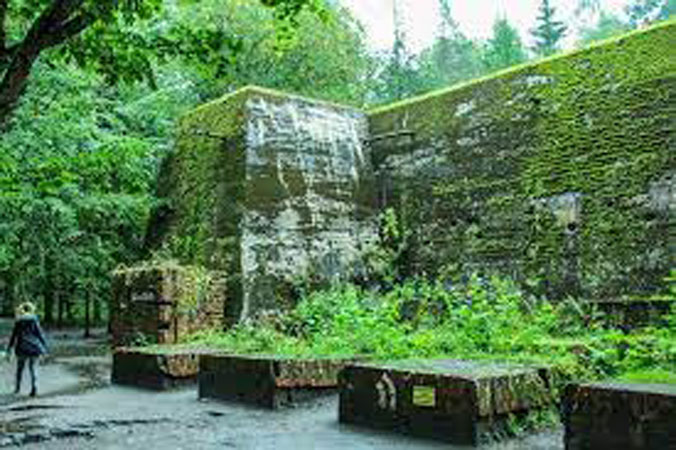 In a dense forest in former East Prussia, the easternmost province of the German Reich until the end of World War II, Adolf Hitler built his secretive Wolf’s Lair (Wolfsschanze) military headquarters.

Located near the small town of Ketrzyn in Poland, the hermetically sealed and highly guarded complex was built between 1940 and 1944 and included 50 bunkers, 70 barracks, two airfields and a railroad station. Hitler, his secretary Martin Bormann and army head Hermann Göring had private bunkers, and one was reserved for state guests.

The walls of the concrete structures were between five and seven meters thick. Three heavily secured exclusion zones, countless guard posts and ten kilometers of mines protected several thousand military and civilians who lived in the Wolf’s Lair.

“The name comes from Adolf, which means ‘noble wolf’ in Old High German,” tour guide Lukas Polubinski tells our group. That pleased Hitler, and Wolf became his cover name. Tourists in Poland can visit the ruins of Adolf Hitler’s Wolf’s Lair, the bunker where he oversaw the war, the Holocaust, and survived an assassination attempt. The Führer’s own headquarters was perfectly camouflaged and impossible to spot from the air. Towering deciduous trees and nets concealed the facility. Nowhere did Adolf Hitler spend as much time during the Second World War the dictator passed around 830 days in the bunkers at Wolf’s Lair.

From the outside, Hitler’s bunker resembles an ancient Egyptian tomb. Hitler lived in this tomb, he worked and slept there. “It seemed as if the seven-meter-thick concrete walls that surrounded him figuratively, separated him from the outside world and imprisoned him in his madness,” said Polubinski.

When the Red Army, the Soviet Union’s armed forces, drew closer, the German Wehrmacht blew up the quarters on January 24, 1945.

But the massive steel buildings were not completely destroyed. After the war, the locals looted building materials from the ruins but huge blocks of concrete still lie in the forest, overgrown with ferns and moss.

The minefields were cleared, and tourists have been flocking to Wolf’s Lair since 1959. Almost 80 years later, visitors can still sense the atmosphere of the place where Hitler, his generals and marshals not only planned campaigns but also discussed the genocide of the Jews in detail.

For a while, one tour operator allowed visitors to sit on tanks and play war games with air guns. But the approach put off potential visitors, Polubinski said. Since 2017, the Wolf’s Lair has been under state management. About 300,000 people visit annually, most from Poland but many from around the world.

It is forbidden to enter the bunker remains, yet some visitors climb into the few remaining corridors. “We’ve had to pull many out who got hurt,” said Polubinski, admonishing the group to please “stay on the paths.”

I have no desire at all to crawl through the damp corridors. It must be oppressive being surrounded by meters-thick concrete.

A few steps into the area, I spot a memorial plaque commemorating Claus Schenk Graf von Stauffenberg. On July 20, 1944, the colonel tried to kill Hitler with a bomb.

The attack failed. “It was not the first attempt on the Führer’s life,” Lukas Polubinski said, adding there were at least 42 attacks on the dictator. What the world would have been spared if only one of them had succeeded, I think to myself.

Hitler took it as a good omen that he kept escaping. But he was wary. Visitors to the Wolf’s Lair were checked before entering the seemingly impregnable fortress. I figure it was almost a miracle that Stauffenberg got close to Hitler with a bomb at all.

Hitler survived the attack only because it took place in a wooden barrack. He and his military staff had gathered to discuss the military situation, and Stauffenberg was also invited. The colonel had already tried several times to smuggle in a bomb but always had to abort at the last moment.

This time Stauffenberg succeeded in placing a briefcase with a bomb under an oak table next to Hitler – but someone pushed it aside with his foot because it was in the way. Hitler owes his life to this circumstance, as well as to the fact that the blast pressure was directed outward through the windows that were open because of the summer heat.

Four officers were killed, while Hitler was only slightly injured. Had the meeting taken place in the bunker, he presumably would have died.

Stauffenberg had left the room under a pretext. Convinced of Hitler’s death, he left for Berlin to complete the putsch. Instead, he and his co-conspirators were arrested and executed that very night.

Why didn’t the Allies attack the Wolf’s Lair to end the Nazi terror, I wonder. Simply because the bunkers were too massive, said Polubinksi.

“Probably the British and the Americans knew from the summer of 1943 that the Wolf’s Lair existed, but they weren’t concerned with the buildings – they wanted to get Hitler. And they didn’t know when he would be there.” Besides, the tour guide argues, the planes at the time didn’t have the range to fly to East Prussia, drop bombs and return to England.

Hitler chose the location in East Prussia not only because it was a good hideout, but above all because it was not far from the Russian border, Polubinksi explained. On June 22, 1941, he ordered the attack on the Soviet Union from the Wolf’s Lair. Just a few kilometers away, also well-hidden in the dense mixed coniferous forest, the Army High Command had set up its headquarters, known as the Mauerwald. Unlike the Wolf’s Lair, these bunkers were not destroyed. Life-size figures have been placed in the damp, oppressive rooms, visitors can marvel at a replica of a submarine, and surprisingly, a replica of the legendary Amber Room, a chamber decorated in amber panels.