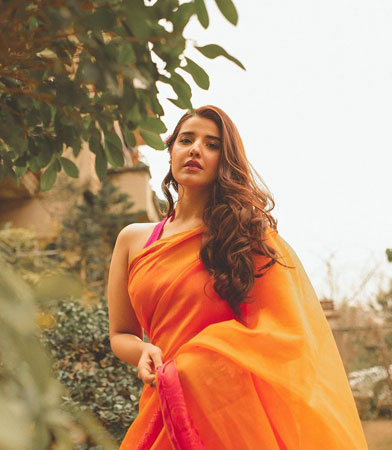 The ‘Parchi’ star turned to her account on the photo and video sharing application, Sunday, and shared a bunch of pictures on the feed, which went viral across social media platforms. “Gulon makn rang bharayyy,” read the caption with her nine-picture gallery.

The now-viral pictures had Farooq flaunting a gorgeous orange-hued saree paired with a fuchsia halter-neck blouse to compliment the trimmings on the fabric. The movie star kept the look minimalist yet old-school with just a flower in curled hair, and a few of them around her wrist.

“Such a lovely vibrant saaree! The colour simply lit my whole day haayee,” she detailed about the outfit.

The snaps shared by the actor on her Instagram handle were well-received by her massive fanbase on the platform as well as Lollywood celebs. Several of them took to the comment section and dropped compliments for Farooq.

Here is what her fans had to say:

‘You are so pretty’

The actor with 2.6 million followers on Instagram, has earned herself a name not only on the small screen but also as one of the most sought-after film actors. Moreover, the celeb has played her part in the revival of Pakistan’s film industry with titles like ‘Janaan’ and ‘Parchi’ which she co-produced with IRK films.

Hareem Farooq has impressed the audiences with her performances in the drama serial ‘Dosri Biwi’ and films including ‘Dobara Phir Se’, ‘Parchi’ along with a cameo appearance in ‘Janaan’.