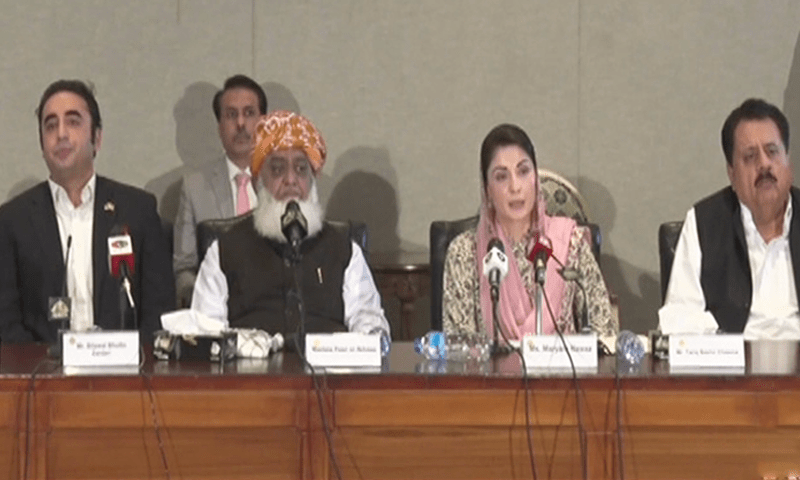 Soon after the Supreme Court ruling, the distraught coalition government objected to the bench, announcing that it wanted a full court bench.

Maryam told the press in her address that she had been advised not to hold the press conference because it would jeopardize her appeal in the Panama case, which was being heard by the Islamabad High Court and was in its “final stages.”

“However, I stated that the people’s representative must think beyond himself or herself and consider the people.”

She believed that “court decisions leave an impact for decades and it intensifies with the passage of time.”

Taking a shot at the judiciary, she stated that institutional contempt came from within.

She objected to the court opening at midnight on a public holiday on Sunday when Ch Pervaiz filed his petition challenging Hamza’s victory in the run-off election on Friday.

She claimed that with the formation of the bench, people had a pretty good idea of what the verdict would be.

She bemoaned the presence of a ‘certain judge’ in every bench that had ruled against the PML-N, wondering why that monitoring judge’ was always included as if there were a judge shortage.

“One or two judges, who have always been anti-PML-N and anti-government, they are repeatedly included in the bench,” she said, adding that “bench-fixing is a crime just like match-fixing”.

“The monitoring (anti-PML-N) judge has been appointed for life,” she deplored adding that the list of injustices meted out to the PML-N was long.

The PML-N leader asked for the SC to take suo motu notice of this issue.

She wondered where the judicial system would head if decisions were always made in favor of those who abused and bullied the institutions.

She regretted that the Hamza-led government in Punjab had never been allowed to work smoothly as he was even unable to form his cabinet. All the time, he was going to courts and attending different petitions challenging his election.

She bemoaned the fact that PML-N leaders were specifically targeted and charged with contempt, whereas other proclaimed offenders, such as PTI chief Imran Khan, were not charged with contempt and instead sat cross-legged in courtroom No. 1 watching the judicial proceedings and mocking the courts.

While venting her rage in the courts, Maryam also turned her sights on Imran Khan. She was outraged that a “liar” had been declared “honest” and “trustworthy.” She claimed that an ‘honest’ man exchanged national exchequer funds for meager diamond rings.

“When it comes to Imran, the interpretation of the constitution has completely been altered,” she regretted.

In his speech, PPP Chairman Bilawal Bhutto Zardari lashed out at Imran Khan, saying he wanted to be an autocrat.

He stated that all coalition partners desired a full court bench to hear this case.

Some forces, according to Bilawal, dislike the people’s government. ‘You can’t stand it when people make their own decisions,’ he added.

He stated that all coalition partners had one demand, which was to form a full court bench. He stated that government allies desired that “our institutions remain impartial.”

“However, some forces in the country want to create a one-unit autocracy,” he lamented, cautioning, ‘don’t ruin the constitution under Imran’s pressure.’

He stated that Imran wished to become a despot while naming every institute as its ‘Tiger Force.’

He claimed that the campaign was a plot against the country’s economic and democratic progress. “We have never allowed a conspiracy to succeed in the past, and we will not allow it to succeed now.” We want institutions to be free of controversy.”

When all judges hear the case, everyone will accept the verdict, according to the foreign minister.

“If only three judges give a decision, then we will not be able to control the political situation that will develop in this country.”

During his press conference, JUI Chief Maulana Fazlur Rehman stated that he had lost all hope of justice from this Supreme Court bench.

He stated that the coalition desired a full court bench. He stated that public representatives should be protected. ‘Everyone must hold themselves accountable,’ he added.

The Maulana stated that he fully supported Maryam’s viewpoints. He stated that he wished to work with the institutions, but that “he has no hope of justice from this bench.”

He stated that the government wished to fortify the judiciary so that its decisions would speak for themselves. “There should be no conflict of interest or the appearance of bias.”

He said that a government given the mandate by the people was not being allowed to function. He went on to say that when a government was not formed as per the will of the country’s institutions, a new setup was imposed through rigging.

“Institutions meddle in political affairs to protect the state but do they ever think that the state is weakened due to their interference?” he asked.

“You are sitting behind a wall. You may decide whatever you want […] and make politicians the culprit in the eyes of the public and defame them. But hold yourself accountable.”

He said that the people’s confidence in the country’s institutions needed to be restored but the latter should also assess their role and hold themselves accountable.

“We want to make country’s future brighter but for that, stability for the government is important […] We are united on the fact that we have to set the economy right but let us do it.”

The JUI-F said that it was very easy to “create difficulties”.