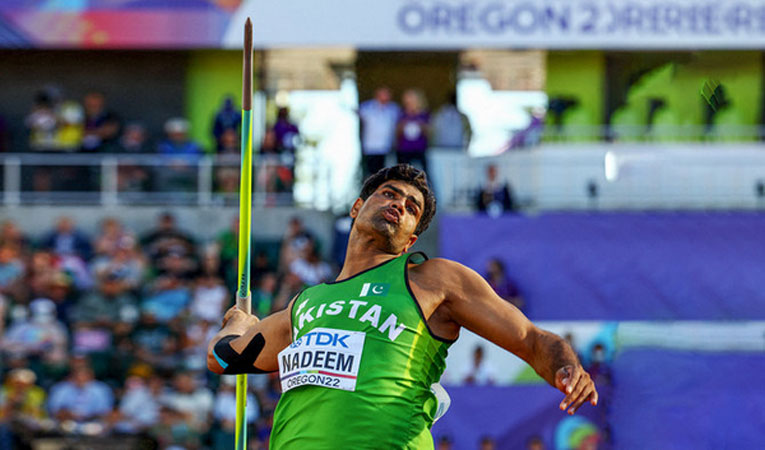 LAHORE: Pakistan’s Arshad Nadeem finished fifth in the World Athletics Championships javelin final in Oregon, Eugene to become the first national athlete to achieve a top-eight finish.According to a report in World Athletics, Grenada’s Anderson Peters beat Olympic champion Neeraj Chopra to retain his world javelin title on Saturday, saving his best for last with a throw of 90.54 metres after leading the competition throughout.Peters was the only athlete to breach the 90m-mark, doing so three times in windy conditions at Hayward Field.Chopra threw a best of 88.13m to finish second while the Czech Republic’s Jakub Vadlejch, who won silver in Tokyo, took bronze with an effort of 88.09m.

Germany’s Julian Weber remained in fourth place, while Arshad Nadeem placed fifth with 86.16m. Finland’s LassiEtelatalo was sixth (82.70m). Moldova’s AndrianMardare and Finland’s Oliver Helander also threw beyond 82 metres in seventh and eighth respectively.”Most of the throwers prefer the wind from behind but today we had a head wind,” Peters said. “So it was a bit challenging today but I pulled it off. To defend the title is not an easy task. I had to push myself.”The last attempt, I already knew I was a champion but I was working on my technique in every throw and I finally got it through.”Chopra’s throw was beyond the 87.58m he produced in Tokyo, where he became the first Indian to win an individual athletics gold.

His silver medal in Eugene was India’s first at a World Championships and just the country’s second overall after Anju Bobby George took bronze in the women’s long jump in Paris in 2003.Chopra, who was bidding to become the first men’s javelin thrower to follow an Olympic triumph with a world title since Norway’s Andreas Thorkildsen in 2009, said he was not feeling his best.”In the first three throws I did not feel good. My warm-up was not good,” he added. “I felt something in my groin during the throw but I think it is okay. It was a good experience today”.