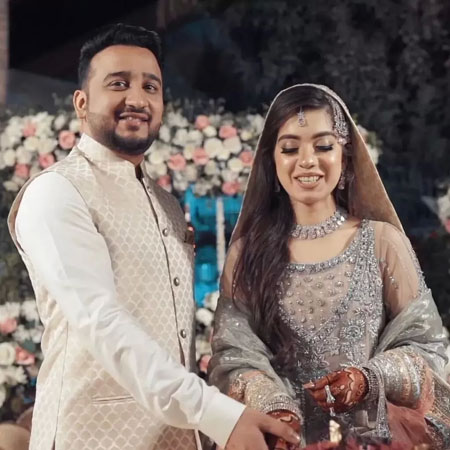 Actor Arisha Razi has called out a Karachi-based photography studio, Studio86, for sharing her nikah photos without her consent.

The studio, on the other hand, claims that they had a deal that the photos could be shared three months after the event.

Taking to Instagram, Razi wrote, “As you guys may have already seen my viral nikkah ceremony video, it was a very private event. It’s very shameful, hurtful that a company like Studio86 have no sense of privacy.”

She went on to say that her pictures and videos have been used without her permission and that the page knew very well how private the event was. “Sirf thodi publicity and views k liay meray family moments viral kerhdiye [for the sake of publicity and views they made my family moments viral]. Just for the sake of followers,” she wrote, urging her followers not to hire the studio as they would share photos of their private events without consent.

In another Instagram story, she said that while she might share these “happy moments” of her life, it is her call to make and nobody has the right to do it without her permission.

In response to her claims, Studio86 issued a statement on Instagram saying that the day they were hired it was decided by both the parties that the videos and photos will be shared online after three months.

According to their Instagram stories, the page approached Razi for approval before posting the videos and photos but she did not reply to their messages.

A lot of people showed support for Razi in the comment section of the photographer’s statement. “Shame on you someone’s special moments without their consent,” wrote one user under the post.

Another wrote that it’s the photographer’s mistake and they must accept it even if Razi hadn’t responded to their messages.

Razi has been involved in many projects and has often appeared in shows along with her sister Sara. Razi has worked in shows such as Chupke Chupke, Mr. Shamim, Raaz-e-Ulfat and Sadqay Tumhare.

The 22-year-old has also worked in films such as the 3 Bahadur franchise and Sacch.