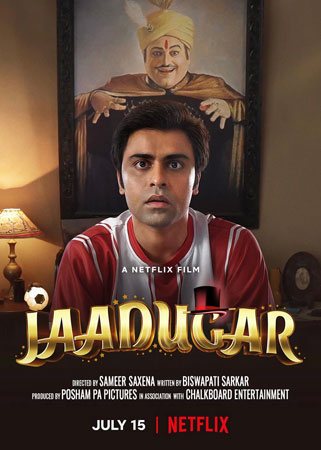 A magician of modest standing turns into a footballer of little ability. At stake is the most important trophy of his life: the woman he loves. Given the film’s trite premise and lumbering rhythm, neither the protagonist’s half-hearted embrace of the Beautiful Game nor his well-meaning sleights of hand can prevent Jaadugar from being more messy than magical.

Supposedly a social commentary on love and longing in a small town, the superficially breezy Jaadugar makes heavy weather of traversing the distance between intention and outcome. Not only is its repertoire of tricks uneven and laboured, the film also comes a cropper in its attempt (which is undeniably commendable at first flush) to rewrite the conventions of two genres – a love story and a sports drama. Forget pulling a rabbit out of a hat, it cannot keep the hat in one piece.

The sports drama suggests that winning isn’t everything. The love story would have us believe that winning is all that matters. So, magic, football and amour go hand in hand as the protagonist uses his primary skill to control the consequences of the remaining two. No matter how hard he and the film try, Jaadugar is more faff than fun, more abracadabra than performance.

Directed by Sameer Saxena (who also puts in an onscreen appearance as a doctor-cum-football commentator) from a screenplay by Biswapati Sarkar, Jaadugar is an overlong, lacklustre, scrappy affair. It combines bland ingredients to serve up a cocktail that is anything but heady

For an ‘independent’ production with no marquee names in the cast, Jaadugar is inordinately long. One wonders if it is actually a miniseries that has been truncated into a three-hour-long film? Even if that isn’t the case, the lack of momentum and the unsteady trajectory – it moves from one strand of the story to another without any apparent urgency – are palpable.

Jaadugar, streaming on Netflix, falls back on perfunctory slice-of-life tropes. The plot follows multiple tangents without achieving much cohesion. A guy is in love. Football does not excite him. But as his all-love-and-no-play approach to life threatens to thwart his desires, he is forced to take the field. But he does not stop treating his girlfriend like a football

Jitendra Kumar (Kota Factory, Panchayat) plays Magic Meenu, a man who performs at birthday parties and other nondescript dos in the football-crazy city of Neemuch (this is definitely the first time the Madhya Pradesh town has made it to a Bollywood movie).

Meenu’s dad was a great goalkeeper whose life was cut short. The hero isn’t, however, interested in carrying the legacy forward. His retired footballer-uncle Pradeep (Jaaved Jaaferi), the only family that he now has, has other ideas. He coaches a ragtag team that lurches from one big defeat to another in a neighbourhood tournament.

Conjuring kulfi sticks out of thin air is Meenu’s stock trick. His idol, Magician Chhabra (Manoj Joshi), isn’t one to be easily impressed. In both love and magic, one has got to dig very, very deep, advises the veteran illusionist. And thereby hangs a tale that only serves to underscore that grasping the real meaning of depth is beyond Meenu.

He suffers a heartbreak early in the film. He does not mend his ways. He falls for the next pretty girl he spots. The woman, Disha (Arushi Sharma), is an ophthalmologist and way out of Meenu’s league. But the magician carries on regardless.

Resorting to means that smack of unseemly desperation, he makes his way into the girl’s heart. Once he has won the girl over, he encounters an even more daunting obstacle – her dad. That is where football comes into the equation and he is left with no option.

Jaadugar is about magic, football, love and an iteration of the Dronacharya-Eklavya myth all rolled into one. But the coalescence of the components is far from seamless.

Neemuch does have a long football history, but the film invents a legend about a striker who scored India’s winning goal from the penalty spot in the 1951 Asian Games football final to hang its plot on. So thundering was the kick that the Iranian goalkeeper had no time to budge an inch.

The departure from recorded fact isn’t the only creative licence that the film takes. The football action in Jaadugar, with all the breaks, brawls, banter and bedlam on the field and off it, gives reality a wide berth.

The team that Meenu’s uncle manages is a motley group. It is made up of a part-time insurance agent, a folk singer, a librarian, a convenience store owner and even a married woman whose ball control is infinitely better than the men’s. Until a migrant worker is plucked out of nowhere and added to the line-up, the lady is the team’s star player.

Do not ask how and why a male football team has a female member. Like much else in the film that defies logic, the script does not make any attempt to explain that bit of the story. Yes, it throws in one stray line to reveal that the tournament has three women in all, but we do not encounter the two others who have broken the gender barrier.

Jaadugar is merrily arbitrary and contrived. The story is capricious all right, but it is unable to steer clear of dull, laboured patches. A bit of magic might have done the trick. No miracle materialises and becomes difficult to tell farce from fallacy.

Nothing in the film is worse than what is meted out to the heroine, a woman who has surrendered all agency to the men in her life – her father and her persistent and puckish suitor who will not take no for an answer. This lover boy is a bit of a leech – a painful reminder that Hindi films still believe that it is perfectly all right for a man to stalk a woman until she gives in. What’s worse, her fate is allowed to ride on a football team that has never won anything.

Sentimentality seeps into the sports comedy via the fact that Magic Meenu lost his parents prematurely in a road mishap. It is left to him and his uncle to take the family’s love affair with football forward. His uncle shoulders the responsibility whole-heartedly; Meenu has next to no interest in the game. They clash over their differing worldviews.