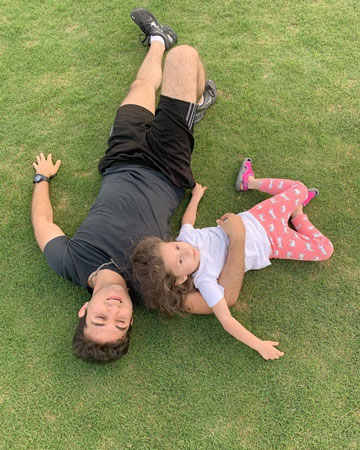 On his Instagram handle, Thursday, the ‘Dil-e-Veeran’ actor shared a video of daughter Nooreh along with an adorable wish for the birthday girl. The clip which was followed by a picture sees the star kid master the steps on a groovy song.

“Happy Birthday my QUEEN – My joy My heart My life,” Sabzwari wrote with the snippet on the photo and video sharing social application.

Hundreds of social users including his fellow showbiz celebs showed up on the post extending their heartfelt greetings to the birthday girl. Celebs like Mehreen Syed, Fouzia Amaan and Ayaz Samoo among others were spotted in the comments section.

It is pertinent to mention that earlier his ex-wife, actor Syra Yousuf also penned a wish for the daughter with a montage video. “Happy birthday Nooru baba,” the ‘Sinf-e-Aahan’ actor wrote with the heartwarming video on the social site.

For those unversed, the showbiz celebs Syra Yousuf and Shahroz Sabzwari tied the knot in October 2012 and welcomed their only daughter Nooreh after two years. Their marriage came to an end in March of 2020 because of ‘irreconcilable differences’, however, the celebs have decided to co-parent the kid.