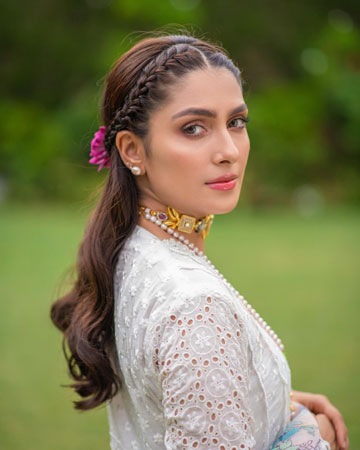 Famous Actress Ayeza Khan has gotten into a very big controversy. As per the page titled Pakistani Dramas Page on Facebook, a woman named Aruba Tariq was talking to Ayeza Khan’s brother Ahad Khan. They both liked each other and later Ayeza’s brother proposed to her.

Every planning of the wedding was going on but then they did not get married and the reason told by Aruba Tariq was that Ahad Khan was a cheater and his family lied about many things. She revealed that Ayeza’s brother was not well educated but Ayeza’s family told Aruba that he has a good job and is very well educated.

She revealed about Ayeza Khan that she is a terrible mother and hates her in-laws and talks very bad about people who she works with. Aruba also said, “Ayeza is a ‘celebrity’ who controlled my entire wedding.”

According to Aruba, she controls everyone in the family. “You can’t even take a breath without her approval,” she added. Aruba said that Danish Taimoor has nothing to do with this. “He is a good person he goes to shoots, gym, eats food, and prays, he is a good person,” Aruba maintained.

Aruba Khan also claimed that Ahad Khan was also the ex of Sarah Khan. Aruba posted has posted these claims on Facebook and Galaxy Lollywood also talked to her.