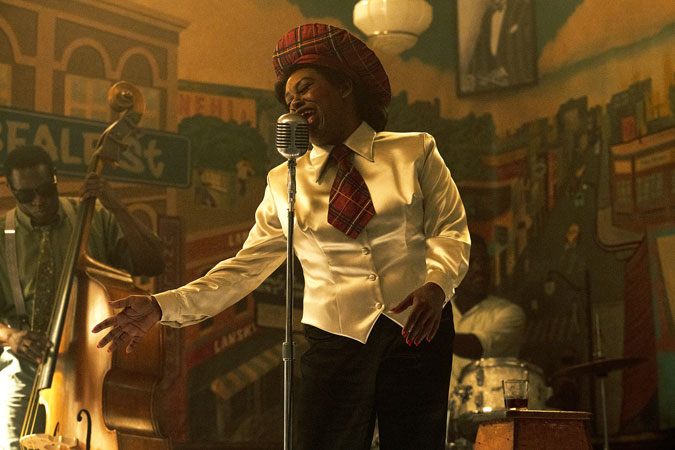 The Elvis movie has lost one of its stars. Actress and musician Shonka Dukureh, who portrayed Big Mama Thornton in Baz Luhrmann’s new film Elvis, was found dead in her Nashville apartment on July 21, according to a tweet from Nashville police.

The 44-year-old was discovered in the bedroom of her home, which she shared with her two young children, per police. Authorities said no foul play is suspected in her death. A spokesperson for the Davidson County Medical Examiner confirmed to E! News that her body is in their custody for an autopsy, which will be released at a later date. No cause of death has been revealed. Following her passing, fans took to her Instagram page with messages to “Rest In Paradise.”

Dukureh’s only film credit is Elvis, per IMDb. The Fisk University graduate also made an appearance in the music video for Doja Cat’s song “Vegas” from the movie’s soundtrack. The film, starring Austin Butler and Tom Hanks, was released earlier this year.

Dukureh reflected on her first big role in an interview shared to her Instagram page last week. “Gratefulness is where I live cuz my granny, gmama, momma, family modeled and instilled it in me,” she captioned the clip. “It isn’t a posture of less than or crumbs scraping, but one that acknowledges good things aren’t a guarantee and when we encounter them thankfulness, gratefulness is the least we can express.”

Co-star Olivia DeJonge, who played Priscilla Presley onscreen, told Entertainment Weekly that “a star was essentially born” when Dukureh performed for the cameras. DeJonge said she saw “something in her sort of break free. It was just, it was insane to watch.”

Dukureh reposted the clip and shared her gratitude: “Grateful to not only hear her words, but the beautiful sentiments of all the cast present as well as Baz.”

She added, “If sitting somewhere wondering when, if, folks will get you, just keep on keeping on, the right folks will.”