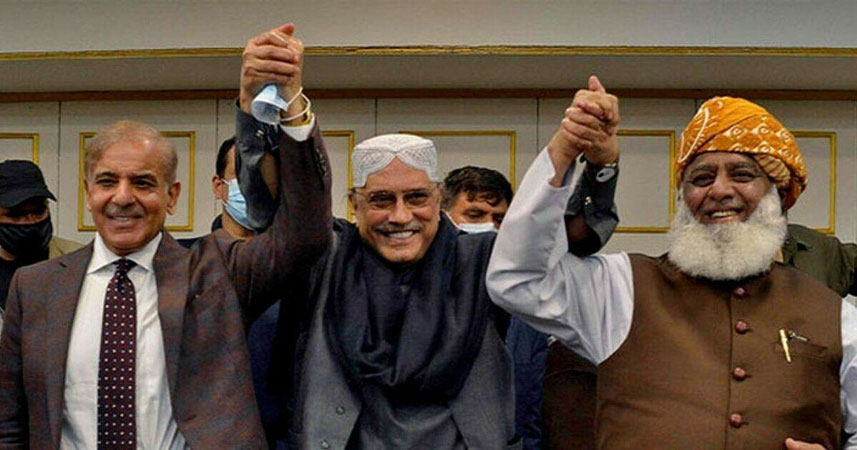 The ruling alliance Saturday demanded that the Chief Justice of Pakistan (CJP) Justice Umar Ata Bandial should constitute a full-court bench to hear the petition filed against the Punjab Assembly Deputy Speaker against the election of Hamza Shehbaz as Chief Minister.

“All the parties in the coalition government demand emphatically of the CJP that a full-court bench hear the case filed against ruling of the deputy speaker Punjab Assembly,” said a joint statement issued by the ruling alliance.

The statement said it would be fair and in spirit of justice that the full court bench, comprising all the respected judges of the Supreme Court, hear the review application of the Supreme Court Bar Association, the present application, and other related applications, and schedule them for hearing together and issue a verdict because these were matters of national, political and constitutional importance.

The statement said the country was paying a heavy price for the ongoing political instability. It said the economy was at risk of bankruptcy, while people were facing inflation, unemployment and poverty.

“Imran Khan is repeatedly creating chaos in politics only to avoid accountability, hide his corruption and gain power through the back door. The Constitution also draws clear lines of authority between the Legislature, the Judiciary and the Executive, but an ‘arrogant violator of the Constitution’ who is Imran wants to erase those lines,” said the statement.

“He actually wanted to destroy Pakistan’s constitution, people’s right to rule and democratic system like the economy. This thinking and attitude had become a termite for the state system of Pakistan,” the joint declaration said.

“The government allies also feel that Imran Khan’s attitude and thought are like a ‘termite’ eating the state system of Pakistan but the ruling coalition reiterates its commitment that there will be no compromise on the Constitution, democracy and people’s right to rule,” said the statement. The leaders of coalition parties maintained that they would move forward and fight against the “darkness of fascism”. By a majority of 3-2, the apex court had held on May 17 that Article 63A of the Constitution, which deals with defection, protects the fundamental rights of a parliamentary party rather than its members. Therefore, a vote cast contrary to the party line should not be counted, the opinion said.

According to the opinion, the dissident lawmakers were not allowed to vote against the party line in four instances including the election of prime minister and chief minister; a vote of confidence or no-confidence; a constitutional amendment bill; and a money bill outlined under Article 63-A. Last night, Hamza Shehbaz was declared a victor after Punjab Assembly Deputy Speaker Dost Mohammad Mazari ruled that PML-Q members’ votes were not counted in light of party head’s letter. According to Mazari, Hamza received 179 votes whereas Elahi garnered 176 votes, but only after 10 votes of Elahi’s own party were not counted, which turned the tables in Hamza’s favour.

In line with the ruling of the Supreme Court verdict on Article 63-A, related to the defection, the deputy speaker said he had rejected the votes of PML-Q lawmakers. Earlier, the SCBA had filed a petition in the top court for a review of the court’s May 17 opinion on the presidential reference regarding the interpretation of Article 63A, which is about the status of the defecting lawmakers.