If there was a university program in Machiavellian manipulation, Mr Zardari would have a PHD and would be elevated to Professor Emeritus for services rendered. Flush with cash from the loot in Sindh, his war chest is overflowing.
What is his objective? Over-turn the loud and clear verdict of voters in Punjab. What is at stake? The future of this imported regime. Punjab Government provides the muscle and guns to enforce the fascist agenda of these crooks. Without Punjab, PM Sharif will be the head of Government in the Centre; however, his ability to brutalize will be confined to the Capital. His enforcer, Rana Sana’s bluster will have no teeth without the mercenary Punjab Police.
In Punjab assembly voting PTI and PML (Q) got 186 votes in favour of their joint candidate Pervez Ellahi. Incumbent Hamza Sharif got 179 votes. Under normal circumstances, Mr Ellahi had won. Not so when toxic Zardari is in the mix. He is carrying on the legendary past of the Zardari clan. They specialized in raiding and looting caravans in the days gone by.
PML (N) specializes in voting day rigging and coercive politics like “Changa Manga” confinement. However, Zardari has taken it to a new level. Their first victim was PTI’s MPA Masood Majid from Rahim Yar Khan. He fled the country to abstain from voting. Apparently, he has landed in Turkey two million dollars richer. Wise move on his part. Pakistanis are in no mood to tolerate “lotas.” Their wrath and open resentment are formidable. Various other attempts by PML (N)’s new macho man, Ata Tarar to offer huge bribes to PTI MPAs failed. Three of them have given their sworn affidavits confirming it. These efforts are a clear violation of the Supreme Court’s decision.

History is replete with the failure of brutal state machinery standing up to popular movements led by a dedicated leader.

In Punjab politics unity among two families was exemplary; the Chaudhrys of Gujrat and Sharifs of Lahore. Zardari’s toxicity has caused a schism amongst the Chaudhrys. Oozing charm, in his multiple meetings with Chaudhry Shujaat, he turned him against his cousin. I recollect an assertion by his father, Chaudhry Zahoor Ellahi in presence of his brother Chaudhry Manzoor Ellahi (Pervez Ellahi’s dad). It was during the dark days of Bhutto’s onslaught against opponents. He said “Hafeez I draw my strength from my family. Without them, I am nothing and an easy target.” That unity is in tatters today. It is a tragedy from my perspective having known the family for over five decades.
Punjab’s election has sucked in all the oxygen on the national stage. It has taken away the focus from the impending debacle of an economy in a tailspin. The recent photograph of the big three of PDM, PM Sharif, Zardari and Maulana Fazal exchanging jokes reminds me of Roman Emperor Nero. During the great fire in AD 64 in Rome that destroyed 2/3 of the city, he was playing fiddle before a private audience. Do they even realize the enormity of the situation? It appears they don’t give a damn for the future of the nation; they are secure with their offshore billions.
The rupee is in a free fall against the US dollar. The stock market is tanking in a big way. Exports are declining fast and overseas remittances have dropped. Agricultural production could nosedive due to the unavailability or affordability of inputs necessary for a decent crop. These are symptoms of an ailment that can drive Pakistan over the precipice. The economy is in serious trouble. The current account deficit has shot up to alarming levels and foreign exchange reserves are dropping like a brick. State Bank’s regulatory capacity is severely diminished. IMF’s approval should have boosted the Rupee. The opposite has happened.
The country’s top economic manager Miftah Ismail appears clueless with Ishaq Dar breathing down his neck. How did the economy get derailed? It emanated from the conspiracy-based removal of PM IK. The assumptions of regime change planners and executors went out the window. They misread two factors. First, Imran Khan’s resilience and capacity. Second, the political awareness and acumen of Pakistanis.
History is replete with the failure of brutal state machinery standing up to popular movements led by a dedicated leader. With all the crooks ganged up on one side, a lot rests on IK to turn around the fortunes of this nation. The setback in Punjab Assembly should get rectified by Supreme Court. Deputy Speaker’s ruling is illegal and needs to be reversed. There was a spontaneous protest against this blatant fraud. It will further re-enforce IK’s narrative that has already gained full acceptance amongst the masses. It is a very volatile situation that could easily get out of hand.
This political turmoil will continue to drive the economy into an abyss. The only option is free and fair elections to regain political stability. Letting the present regime continue will spell disaster. PML (N) support base in Punjab is eroding fast. Maulana Fazal’s recent threats to disrespect women are revolting. His call to arms and Rana Sana’s angry outbursts are clear signs of frustration. IK has held back crowds from taking matters into their own hands. The establishment needs to recognize this frustration before it overtakes the leadership. In a fascist regime rights are not granted they have to be snatched.

The writer is the director of CERF, a non-profit, charitable organisation in Canada. 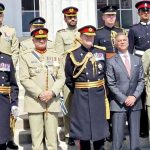