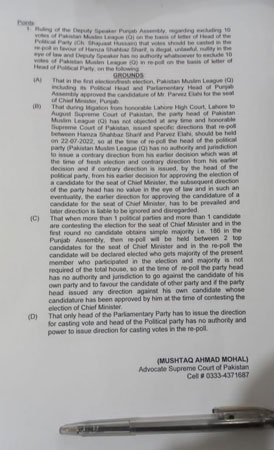 PTI leader Mehmood ur Rasheed and Punjab Assembly Speaker Chaudhry Pervaiz Elahi have filed a petition in Supreme Court’s Lahore registry against the ruling of Deputy Speaker Dost Mazari during the chief minister’s election on July 22. Speaking to the media outside the SC registry in Lahore, Elahi, who was the other CM candidate, said the top court’s verdict in the Article 63 A case was crystal clear but it was quashed unlawfully by Mazari. “We, the 186 members of the Punjab Assembly are here to file a petition in the top court,” he said, highlighting how the parliamentary party had nominated him while the SC had made it clear that only Hamza and him are the only candidates that can contest the CM’s election. Taking a dig at Mazari’s state of mind, Elahi termed him a “stupid person” who should be slammed with Article 6 and also contempt of court.

“How did the deputy speaker bring police personnel inside the assembly again?,” PML-Q’s Punjab president questioned, citing how Asiya Bibi was beaten by the police last time inside the assembly that placed her in the ICU for at least three months. He maintained that PTI and PML-Q adopted a lawful approach according to the law and Constitution. “The letter should have been disclosed before voting. MPAs never received the letter.”

Further lambasting Mazari, Elahi said the deputy speaker does not know how to announce the result. “How can he remove the first contesting candidate?.” He concluded that if 10 PML-Q candidates had already voted in the CM election’s first round then it does not make sense in discarding their votes in the run-off CM poll.