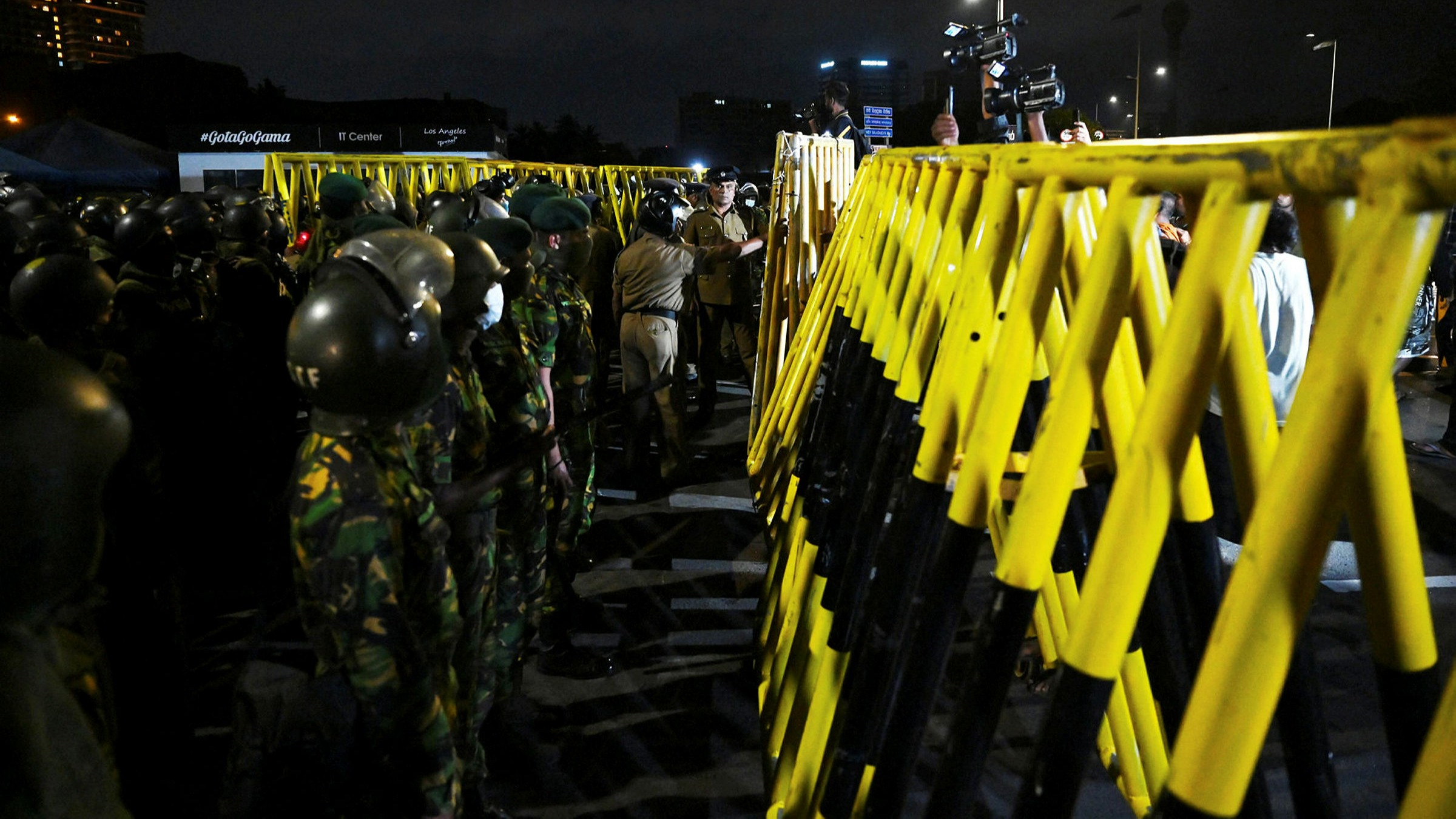 Sri Lankan security forces demolished the main anti-government protest camp in the capital early Friday and evicted activists hours before the new president was due to name a cabinet.

The raid came a day after veteran politician Ranil Wickremesinghe was sworn in as the crisis-hit country’s new leader, replacing Gotabaya Rajapaksa, who fled and resigned after protesters overran his palace.

Troops and police Special Task Force commandos armed with batons and automatic assault rifles swooped in on protesters blocking the capital’s Presidential Secretariat hours before they were due to vacate the area.

Hundreds of soldiers removed barricades set up by protesters blocking the main gate of the sea-front building, which demonstrators had partly overrun earlier this month.

An armored personnel carrier was also seen in the area.

Activists had announced they planned to hand over the building, a symbol of state authority, on Friday afternoon, after a cabinet was sworn in by Wickremesinghe.

The cabinet, which is expected to feature a cross-section of political parties, faces the difficult task of steering the country out of its worst economic crisis since gaining independence from Britain in 1948.

Troops were also seen attacking people, including journalists, with batons as they advanced toward small groups of protesters gathered at what had become known as the “GotaGoGama (village)”.

The head of the influential Bar Association of Sri Lanka, Saliya Peiris, condemned the military action and warned it would hurt the new government’s international image.

“Unnecessary use of brute force will not help this country and its international image,” Peiris said in a brief statement. He said several people, including a lawyer, had been detained by security forces.

The military used loud-hailers as they ordered a few hundred men and women camping overnight to pull back and confine themselves to a designated protest site near the secretariat.

Police cordoned off the main roads leading to the area to prevent more people from joining the protesters.

Supporters of the months-long campaign pressing Rajapaksa to step down had taken over the area after capturing his palace on July 9, forcing him to flee to Singapore and eventually resign.

After Rajapaksa stepped down, six-time prime minister Wickremesinghe took over the leadership temporarily, until he was confirmed as the new president in a parliamentary vote on Wednesday.

Wickremesinghe had warned protesters that occupying state buildings were illegal and that they would be evicted unless they left on their own.

The day Rajapaksa was forced to flee, protesters also set fire to Wickremesinghe’s private home in the capital.

“If you try to topple the government, occupy the president’s office and the prime minister’s office, that is not democracy, it is against the law,” he said, making a distinction between peaceful protesters and “troublemakers” engaging in unlawful behavior.

The new president has also declared a state of emergency that gives sweeping powers to armed forces and allows police to arrest and detain suspects for long periods without being charged.

His first cabinet is scheduled to be sworn in Friday and is expected to include opposition legislators to form a national unity government to lead the country out of its unprecedented economic crisis.

On Wednesday, a court ordered the protesters to vacate a part of their camp and confine themselves only to a designated area.

Protesters have accused Wickremesinghe of being a proxy of the former president’s powerful family — a charge he has denied.