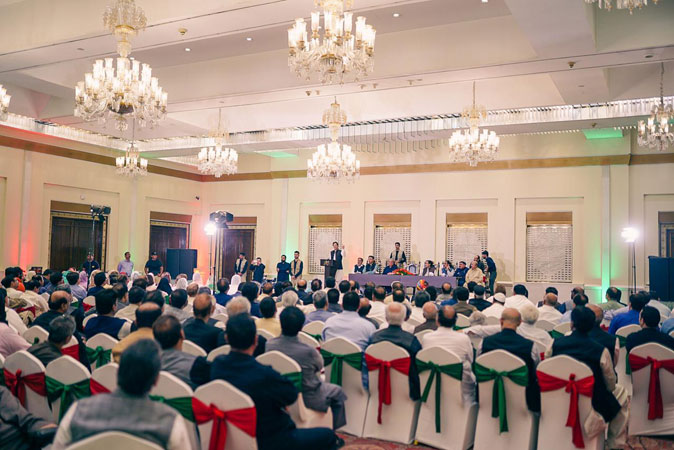 A day before the much-hyped election for the post of Punjab chief minister, former prime minister Imran Khan issued the ‘final warning’ to institutions as well as PDM parties, telling them to brace for ‘consequences’ if the public mandate is ‘stolen’.

“If they steal the public’s mandate, then I am not responsible. I will not be able to control anyone then and the public better not stay quiet,” Imran Khan said during a live telecast in Lahore on Thursday night. “If people’s mandate is stolen in the Punjab Assembly during the chief minister’s election, then I am warning that the country would head towards a condition like Sri Lanka and after that, whatever happens, it would not be my responsibility,” he said.

Khan further warned that if things are not done in a democratic manner, then people’s reaction would not be in his control as the nation is now aware and enlightened and ‘they will not sit silently’. “And if the mandate of the people is respected in election, then we will thank Allah and celebrate,” he added.

Imran also lambasted the incumbent Chief Election Commissioner Sikander Sultan Raja, saying his party “will never” contest general elections under the current CEC, as he called him “dishonest and anti-PTI”. “I have been in politics since 26 years and have seen ECP siding with parties but never seen a more dishonest person than the current CEC,” he said. “The by-election we fought was not only against the coalition parties but against the Election Commission of Pakistan, district administrations and the state machinery.”

Imran recalled how the ECP’s bias was first witnessed in the Daska election and then during senate elections when money was moved here and there to purchase loyalties. “Yousaf Raza Gillani’s son was caught on video. We approached the ECP and they still haven’t announced a decision regarding it so far,” the PTI chief said, adding that “We went to ECP eight times and they ruled against us so we went to court which overturned the ECP decision citing it as illegal.”

“This election watchdog chief also turned a blind eye to Supreme Court orders on our plea in the Senate election case,” Imran noted, adding that Raja recently halted recounting in PP-7 Rawalpindi, insisting that the by-polls in Muzaffargarh were also a sham. He demanded that those who conducted the by-elections in Punjab should be punished as they used all tactics to defeat the PTI.

Further lambasting the head of ECP during his address, Imran said the LG elections in Karachi and Hyderabad were postponed due to rain but when a similar thing happened in Khyber-Pakhtunkhwa local body polls, CEC Raja made sure the ECP’s decision was not in favor of PTI. “PTI strived hard to get EVMs approved for the elections but it was met with opposition from all the political parties and especially the ECP,” Imran said. “The election commissioner was the one who stood against the use of EVMs the most.

These machines show results as soon as polling ends.” He further accused the three stooges – Prime Minister Shehbaz Sharif, PPP Co-chairman Asif Ali Zardari, and JUI-F chief Maulana Fazlur Rehman – of being involved in horse-trading by using their money. “Everybody knows that the PTI has full numbers for the CM election, therefore, they are trying to use their money,” he said. Towards the end of his address, the PTI chairman also took a dig at the former allies of his government, saying that MQM and BAP deemed it fit to reap benefits from us when we were in power and then left us in times of need.

Lahore was abuzz with political activity as party heads held meetings, with the province’s administrative fate set to be decided in less than 24 hours. The PTI and its key ally, Pakistan Muslim League-Quaid (PML-Q), held a parliamentary party session at a hotel in Lahore. PTI Vice President Fawad Chaudhry said that 186 members were present at the session that was later also addressed by party chairman Imran Khan. It is pertinent to mention that 186 is the number of MPAs whose support the chief minister’s candidates would have to demonstrate in the poll tomorrow. Various posts on the PTI’s Twitter account also showed rallies and gatherings of the party’s supporters that were addressed by its leaders in various cities. Meanwhile, PPP co-chairperson Asif Ali Zardari visited and held a meeting with PML-Q chief Chaudhry Shujaat Hussain at his Zahoor Elahi Road residence. Amid widespread confusion over the numbers of the two major parties of Punjab – PTI and PML-N – a crucial session of the Punjab Assembly (PA) will be held today (Friday) at 4pm under the chairmanship of Deputy Speaker Dost Mazari. On the eve of the CM’s election, Mazari wrote a letter to the chief secretary and inspector-general, seeking security for today’s session. In the letter, the deputy speaker requested that security officials should be deployed within the boundaries and inside the premises of the assembly hall to ward off any untoward incident. Mazari said that all security arrangements should be made so that the second poll for the CM election is held in an amicable manner.