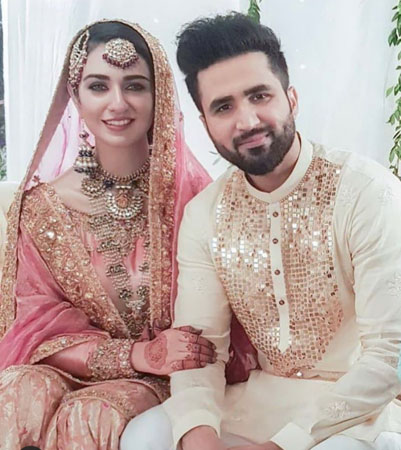 Pakistani actress Sarah Khan and her husband Falak Shabbir have recently celebrated their second marriage anniversary in quite an unusual, yet sweet way. Sarah and Falak tied the knot in July 2020 amid the coronavirus crisis in an intimate ceremony. Falak has now released full song “Kon Tujhay Youn Pyar Karega” for celebrating his second anniversary and it features Sarah and Falak’s real life moments. This is the same song which he sung for her on the occasion of their Nikkah. While wishing Sarah second marriage anniversary, Falak shared a video of roses, Falak penned a love note for her wife saying that Sarah has given the most valuable gift, their daughter Alyana and he said that he is grateful to her for that. Sarah posted the video on her Instagram. She also posted pictures of her special gift and a heart-shaped anniversary cake. “I love you @falakshabir1 every woman deserves a husband like you! Happy second anniversary to us,” she wrote.