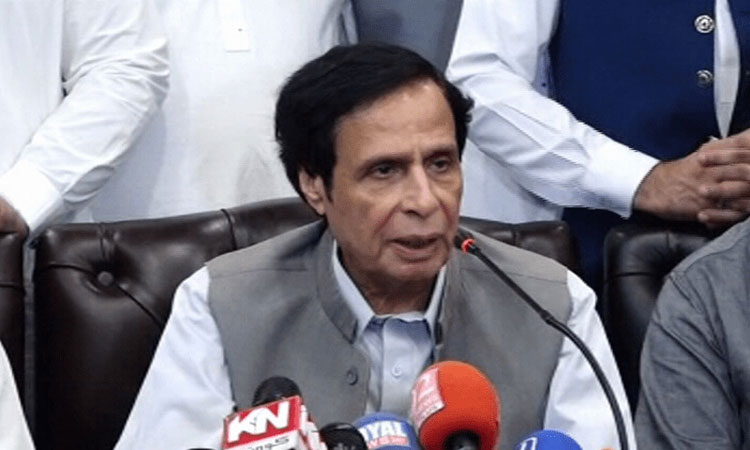 Punjab Assembly Speaker and a candidate for chief minister Chaudhry Pervaiz Elahi Tuesday accused that Interior Minister Rana Sanaullah was using the Intelligence Bureau (IB) to trace the location of legislators in order to influence them ahead of July 22 chief minister’s election. The Supreme Court had ruled on July 1 that the election for the new Punjab chief minister would take place on July 22 and said the incumbent CM Hamza Shehbaz would remain in office till then as it heard the PTI and the PML-Q’s pleas against Hamza’s election and oath-taking. Talking to reporters in Lahore, Elahi said IB DG Fawad Asadullah “must refrain from such acts as he was monitoring the locations of PML-Q and PTI lawmakers at the behest of Shehbaz Sharif and Sanaullah”. “It is my warning to the IB head that he must stop doing this.” He alleged that Prime Minister Shehbaz Sharif had constituted a cell to keep watch on rival MPAs as the chief minister’s election approaches. “They lost the public trust and now they are resorting to such cheap tactics,” Elahi added, says a media report. Asked if any “other forces” were backing the IB, the PML-Q leader said, “Only the prime minister is backing it”. He also claimed that a man associated with the PML-Q who had businesses overseas was also recently picked by the IB from the Lahore airport “for no reason”. Speaking on the occasion, PTI leader Mian Mehmood-ur-Rasheed said the party had endorsed Elahi as its nominee for the Punjab chief minister.

“A letter has been dispatched to all lawmakers at the directives of party chief Imran Khan and the party members will reach Lahore tonight for a meeting which will be held tomorrow.” He said Imran will also reach Lahore tomorrow and stay in the provincial capital for the next two days. He was of the view that PTI had the support of 188 MPAs, while the PML-N had 173 to 174 lawmakers. Rasheed said free and fair polls were the only solution and warned that the political situation would deteriorate further if any “intervention” was made in the elections.

Speaking on the occasion, PML-Q leader Amir Saeed Rawn said it the manner in which the IB was being used was “shocking”. He said the man detained by the IB from the Lahore airport on June 19 “was forced to give a statement that Pervaiz Elahi is involved in money laundering”. Rawn also warned the police to desist from misusing their authority, saying “a list will be prepared after July 22 and no one will be forgiven”.