* Fawad asks CEC to resign as he has 'little time left' 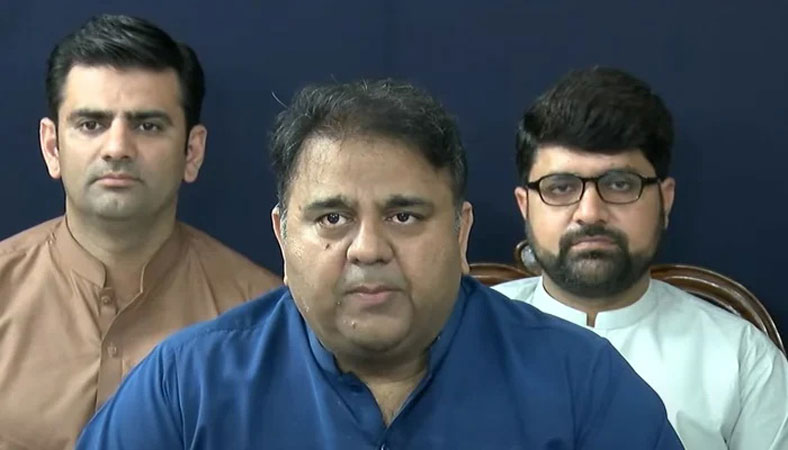 PTI Senior Vice President Fawad Chaudhry said Tuesday that the PTI – once it forms its government in Punjab – may impose a ban on Interior Minister Rana Sanaullah and Punjab Home Minister Attaullah Tarar’s entry into the province next week, a private TV channel reported. The PTI leader’s comments came during a press conference in the federal capital after the interior minister made a statement Monday night, claiming that five PTI MPs could “disappear” during the voting for Punjab’s chief minister. The PTI leader said that the CM election session’s presiding officer, Punjab Assembly Deputy Speaker Dost Mazari, should ban Sanaullah immediately after the statement he made last night. Fawad said that if Mazari doesn’t do so, the PTI may ban Sanaullah and Tarar from entering Punjab a day after the party’s government is formed in the province on July 22. The former information minister also berated the government for making “false cases” against the PTI leadership – during the events leading up to the “Azadi March” on May 25 and during the Punjab by-polls. “…it (government) made a false sectarian case against Zulfi Bukhari and tried to arrest him; attempted to arrest a decent man, Shibli Faraz; also arrested Shahbaz Gill, where he was not even given water for over four hours,” he said. Moving on, Fawad said that Chief Election Commissioner Sikandar Sultan Raja should resign as he has “little time left” – or he will be kicked out eventually. The former federal minister said that the Election Commission of Pakistan (ECP) should be reconstituted and new officials, who have the support of all political parties, should be brought in.

He also mentioned that the PTI is ready to speak to Prime Minister Shehbaz Sharif, but only once he announces the date for the new general election. “We will talk to him. The framework will be worked out by political parties and the most important thing in that will be the reconstitution of the election commission,” he said.

Fawad demanded that an early election be held in the country, doubling down on his party and PTI Chairman Imran Khan’s call. In a scathing attack on Chief Minister Hamza Shahbaz, the ex-information minister demanded the province’s top official resign from office in line with political traditions. “He [Hamza Shahbaz] should be ashamed. His party suffered a humiliating defeat, even Maryam Nawaz and Malik Ahmad accepted it. He should have tendered his resignation immediately after it,” he said.