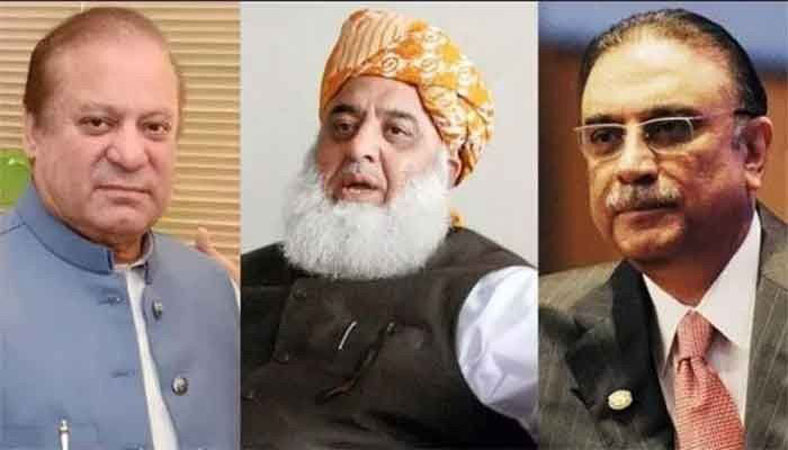 PML-N Quaid and former premier Muhammad Nawaz Sharif, PPP Co-chairperson Asif Ali Zardari and JUI-F chief Fazlur Rehman Monday discussed the country’s political situation over phone after the PML-N’s humiliating defeat in the Punjab by-elections. The three leaders reportedly agreed that a detailed plan of action will be adopted in consultation with other allies. News reports quoted sources as saying that Nawaz, Zardari and Maulana Fazl reviewed the results of the Punjab by-elections and discussed the future strategy of the coalition government in Punjab and the centre. In Sunday’s Punjab by-polls, the PTI bagged 15 out of the 20 constituencies. The clear victory of PTI in the Punjab by-polls has turned around the number game in the Punjab Assembly, with Chaudhry Pervez Elahi now most likely to replace Hamza Shahbaz Sharif as the new chief minister of the province in the coming days. Almost all the politicians who joined the PML-N and voted for Hamza Shahbaz Sharif lost to the PTI candidates. PML-N won four seats and the remaining one seat went to an independent candidate, apart from PTI’s 15 seats.

Before the by-polls, the PTI and PML-Q had already jointly attained the strength of 173 (163 of PTI and 10 of PML-Q). Now, with 15 additional seats, this strength has reached 188 whereas the figure for the simple majority stands at 186. This means the PTI and PML-Q have crossed that landmark. One independent MPA will likely be part of the new ruling coalition.