* As the conversation moved away from Khoosat's latest releases, Momina segued the discussion into something more pressing about the film industry in Pakistan 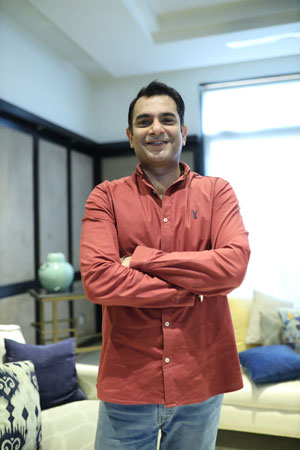 Sarmad Khoosat has been one of the most widely accredited directors in the Pakistani media industry for a long time now.

From creating films that are so outside the box that they get banned from the country, to being nominated at the prestigious Cannes Film Festival, this creative genius has always worked to the best of his ability to create some of the most insightful works of art. Hence, like any other good host with a thirst for knowledge, Momina Sibtain invited Sarmad Khoosat to the hot seat on Momina’s Mixed Plate to get to know more about his latest releases. However, the discussion progressed in to something so much more. Sarmad’s strong voice shifted the focus from his latest film to the industry and how there are still adjustments that need to be made if films in Pakistan are to succeed. Sibtain and Khoosat further discussed the need for regulation of films, how most Pakistani content is released on Eid, the detriments of pitting our own films against each other, and the need for more screens.

As the conversation moved away from Khoosat’s latest releases, Momina segued the discussion into something more pressing about the film industry in Pakistan. She questioned why most movies in the country are released around Eid and why foreign films are being blamed when those releases aren’t successful. She further asked Sarmad his views on the matter.

Sarmad responded by stating that people in the industry need to design calendars better because releasing films at the same time will just lead to those releases being pitted against each other. He said that if there are two films that are being released at the same time, it would still make sense but when there are five releases, then it’s a basic rule of math and probability. “As much as one would like to believe that it is an industry and there is a fraternity- I mean no. There is a very flimsy structure. It does not have the right kind of patronage either,” stated the renowned director. He continued, “For example, if Tare Zameen Par becomes a massive hit in India and somebody, somewhere realizes that it’s an important film, it’s talking about an important topic then there are things that governments or other institutions do. They would just give a tax waiver on that and the film would be screened in colleges and schools. I mean that’s how you promote your cinema. So of course, there is no institutional support that way.”

Momina then mentions that there aren’t enough screens and how the masses cannot afford expensive tickets. She stated that people need smaller screens around the country where people can afford to see films and can get tickets at reasonable prices while having a choice of paying for the cinematic experience of their liking. Sarmad then points out another prevalent flaw in the system by stating that cinema has been crafted on a very classist principle, where it once used to be considered for the masses, it is now just for those who can afford to view it.

“I think that was also just a blame thing and now we have gone to the other side where it’s like ‘oh you have to be a certain amount of socioeconomically empowered to go to the theatre. So that and the blame can’t only be put on the exhibitors I mean they are to be blamed in a way because they need to do their part. But mostly I think there’s a lack of design to it and I think it’s a long food chain, not just beginning with the actors but the cast and crew, exhibitors and the distributors in the middle, and media partners. I think the whole ecosystem requires a good central nervous system which is lacking at the moment.

Momina’s usual lively energy combined with her esteemed guest makes this episode arguably one of her best ones, especially for all film lovers out there who want to see Pakistani talents excel on an international scale, and who can also open up about their expert opinions. We just loved this episode of one of the best directors in Pakistan and can’t wait to see who the next guest is on the hot seat of Momina’s Mixed Plate!