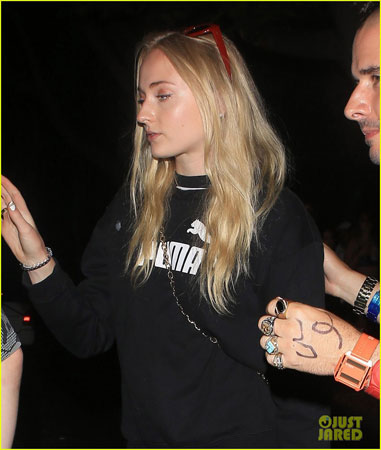 Like any Games of Thrones fan would be, Frankie Jonas was starstruck when he met Sophie Turner.

The younger brother of Joe Jonas revealed just how flustered he got when introduced to his now-sister-in-law back in 2016 around Thanksgiving.

“Honestly, the most star struck I’ve ever been being showing up at this airport and then, on this plane with my family is Sansa Stark,” the 21-year-old recalled during a July 15, appearance on the Chicks in the Office podcast, referring to the British actress’ character on the HBO drama. “And I’m like, ‘Uhhhh!'”

Frankie continued, “I, like, twiddled my thumbs the whole flight and I was just trying to think of something to say to her. I could not for like 24 hours; I didn’t talk to Sophie because I was too afraid because she was so cool.”

The Claim to Fame co-host added that it was “nuts” that the Sophie is now “my sister.”

Joe and Sophie started dating in 2016 and secretly tied the knot in Las Vegas in May 2019. The couple-who held a lavish wedding in France one month later-welcomed their second child, a baby girl, earlier this month.

“It’s what life is about for me-raising the next generation,” Sophie told Elle UK for its June 2022 issue. “The greatest thing in life is seeing my daughter go from strength to strength. We’re so excited to be expanding the family. It’s the best blessing ever.