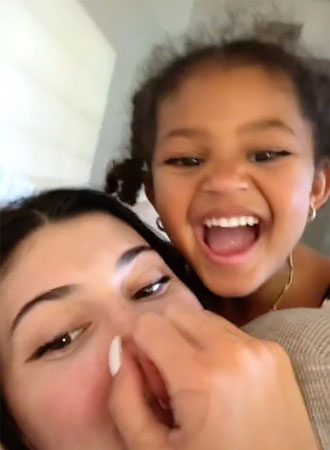 Rise and shine because Kylie Jenner just shared another glimpse into her life as a mom of two. In a July 13 TikTok, the beauty mogul gave a tour of her “favourite spaces” in her kids’ rooms, which included daughter Stormi Webster’s fabulous closet, an adorable wooden rocking motorcycle, shelves for her organisational baskets, a cosy sitting area and a table for two.

Later, Kylie was seen rubbing her Kylie Baby soothing balm on her and Travis Scott’s five-month-old son’s legs. Meanwhile, budding TikToker Stormi made a cameo, putting the lip and cheek stick on her face.

Kylie and Travis welcomed their baby boy on February 2, just one day after Stormi’s 4th birthday. Since then, the reality star and the rapper have shared a handful of photos of him but have never revealed his face

Another thing Kylie and Travis have yet to share? Their son’s name. While the parents originally called him Wolf, the Kardashians star announced in March that their son’s name “isn’t Wolf anymore” and that they “just really didn’t feel like it was him.”

So when does Kylie plan to announce the new moniker? “We just haven’t fully legally changed it or anything, so I don’t wanna announce a new name and then change it again,” Kylie told Extra in April. “We’re just not ready to share a new name yet.”

Although, her sister Kim Kardashian suggested there could already be a winner. “There is one name, I think, lingering, but she really wants to make sure,” the SKIMS founder said on live later that month. “It’s such a really big decision. Honestly, it’s the hardest thing ever in life, is to name a child.”