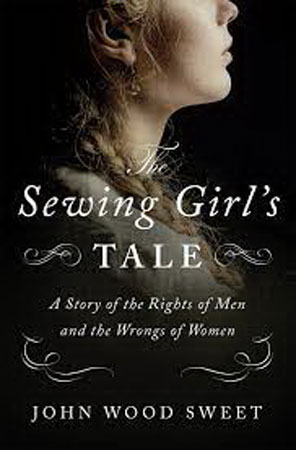 In the early morning hours of Sept. 5, 1793, a couple of blocks from what is now New York’s City Hall, a gentleman with a reputation as a “rake” raped a 17-year-old seamstress whom he had carried into a brothel by force. No doubt countless cases like this one are lost to history papers didn’t report on them, records (if anyone kept them) rarely exist, and they rarely went to trial. In fact, in the decade since the end of British rule, there had only been two sexual assault prosecutions in the city of New York. But this case was unusual for several reasons: Lanah Sawyer, the young victim, had the mettle to report the crime. The state prosecuted it vigorously. And an English lawyer newly arrived in America with a personal interest in rape prosecutions (his patron’s son was under indictment for the same) decided to take notes, producing the first published report of such a trial in the United States and the material for “The Sewing Girl’s Tale,” John Wood Sweet’s excellent and absorbing work of social and cultural history.

Riots ensued; some 600 people took to the streets though somewhat paradoxically if, sadly, in keeping with the misogynistic mores of the era rioters targeted brothels, run largely by women in working-class neighborhoods, rather than the legal system itself. Soon thereafter, Sawyer attempted suicide.

Bedlow’s defense at trial centered on an idea that remains in circulation today: that a rape charge is often just a cover-up for a woman’s shame at having succumbed to her own desires. Bedlow was certainly helped by popular culture.

But the real assist came from the 17th-century lawyer Sir Matthew Hale, whose jurisprudence dominated the trial. Sir William Blackstone’s “Commentaries” on English criminal law supplied the Colonies and later new country with a basic understanding of many crimes, and Blackstone incorporated Hale’s ideas of what renders a rape prosecution plausible. According to Sweet, Hale, who was deeply anxious about malicious women bringing false accusations against innocent men, believed “the question was not simply whether a woman had been forced to have sex against her will but also whether her reputation was good enough, whether she had resisted vigorously enough, whether she had cried out loudly enough, whether she had sustained sufficiently conspicuous physical injuries and whether she had reported the crime soon enough.” Nearly every defense attorney funneled his questions through the Hale framework. And when it was the judge’s turn to instruct the jury in advance of their deliberations, he declared Hale’s ideas “just” and thus, as Sweet writes, completed “the transformation of Hale’s commentaries from suggestions written by a retired jurist into rigid rules that defined the nature of settled law and that were binding on the jurors.”

Perhaps we can’t imagine a defense attorney today saying, as one of Bedlow’s did: “Was it prudent to pick up a man in the streets, and become instantly acquainted with him? Was it discreet to go on the Battery with this stranger, and amuse herself with him beyond midnight?” But rape myths persist: that a woman must do everything she can to repel her attacker, or that her resistance is a critical factor in determining the rapist’s culpability.

This is not Hale’s only legacy. The reader might recognize his name from Dobbs v. Jackson Women’s Health Organization, the Supreme Court’s decision overturning Roe v. Wade and permitting states (and the federal government) to criminalize abortion without apparent limit or exception. In the opinion, Justice Samuel Alito cites Hale’s treatise eight times as evidence that abortion was considered a crime at the time of the Constitution’s writing. Thus, according to the court, the Constitution cannot contain a right to choose to terminate pregnancy. The Dobbs opinion is undoubtedly correct about Hale’s status at the founding, and Sweet’s book confirms it. But the book also provides an opportunity, set apart from the heated politics of abortion regulation, to reflect on the power we give today to legal authorities whose views about basic matters.

A second coda is emblematic of the delights to be found in this book, despite its grim subject. From prison, Bedlow hired Alexander Hamilton, former secretary of the Treasury, as his attorney. It’s an embarrassing cameo for Hamilton, for soon thereafter, Bedlow produced a letter purportedly written by a “Helenah Sawyer” retracting her accusations and begging his forgiveness. There is good reason to think Hamilton was behind the stratagem: A few years earlier, facing accusations that he had abused his office at Treasury by engaging in speculation with the shady James Reynolds, Hamilton had presented a congressional committee with letters that, he said, were written by Reynolds’s wife, Maria, whom Hamilton claimed to have seduced. According to Hamilton, he had merely been paying James hush money to keep the affair secret. This defense – in the words of a Hamilton adversary, “I am a rake, and for that reason I cannot be a swindler” – never made perfect sense (though it did make for a great song in the musical). But in the post-Revolutionary New York that Sweet revives, whose streets are familiar and whose specters haunt us today, it makes all the sense in the world.