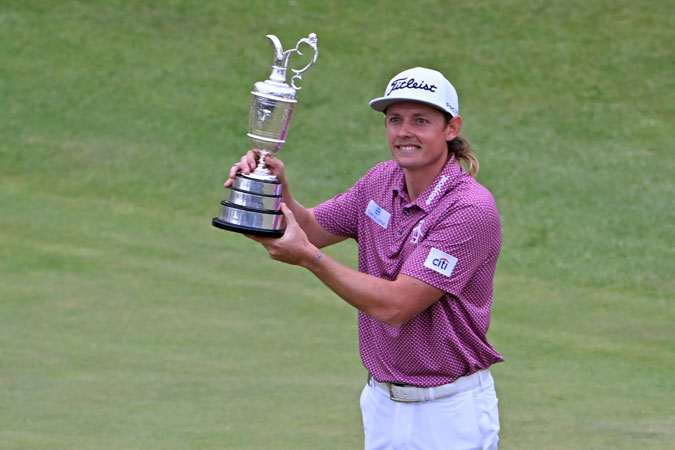 ST ANDREWS: Australia’s Cameron Smith claimed his first major title on Sunday after a stunning final round of 64 saw him win the 150th British Open at St Andrews by a one-stroke margin.Smith began the day four shots off the lead but his eight-under-par final round lifted him to 20-under for the championship and allowed him to finish a shot clear of Cameron Young of the United States, with a frustrated Rory McIlroy another shot back in third.At the age of 28, Smith is the first Australian in almost three decades to win the British Open since Greg Norman claimed his second Claret Jug at Royal St George’s in 1993.

McIlroy, the favourite coming into the week, had started the day in a share of the lead on 16 under par, alongside Norway’s Viktor Hovland, but the Northern Irishman was left to rue a series of missed birdie putts in his final two-under-par round of 70 as he ended at 18-under.With Hovland fading badly with a 74, that left the door open for one of the chasing pack and Smith took full advantage thanks to an incredible performance on the back nine.After reaching the turn at two-under for his round, the world number six embarked on a run of five consecutive birdies from the 10th hole and then rolled in another at the last.

Just before that he showed nerves of steel to save par at the 17th, the legendary Road Hole, but he needed that birdie at the final hole as his playing partner Young produced an eagle to finish with a 65 and end on 19-under.A play-off was avoided, and the Brisbane native with the trademark mullet has his first major.It comes after he finished tied third at this year’s Masters, a tournament in which he also came second in 2020.

McIlroy’s wait to win a fifth major title, eight years after his last, goes on and he can only wonder what might have been had he been more ruthless on the greens around St Andrews.He had been hoping to win his second British Open following his 2014 triumph at Hoylake.England’s Tommy Fleetwood finished in a tie for fourth alongside Hovland on 14 under par.