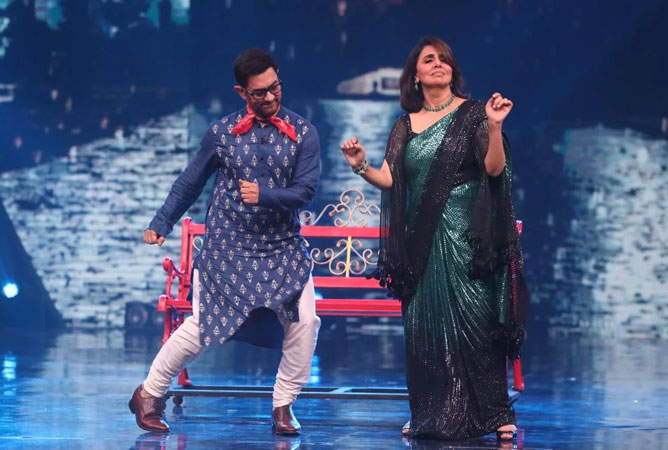 Veteran actor Neetu Kapoor and actor Aamir Khan danced to his iconic song Aati Kya Khandala from his film Ghulam. In a clip, shared by Colors TV on Instagram, the two actors grooved on the stage of the dance reality show, Dance Deewane Juniors. Aamir was a guest on the show.

In the clip, Aamir Khan and Neetu danced side by side as they also did the hook step of the song. The duo raised their hands and moved their body sideways. Aamir also used a red handkerchief, similar to the one he was seen with during the movie.

The duo danced amid cheers from the contestants, audience and judges. For the episode, Aamir opted for blue and white ethnic wear and paired with shoes. Neetu wore a black and green saree and accessorised with jewellery. In the show, Neetu along with Nora Fatehi and Marzi Pestonji are the judges.

Fans will see Aamir next in his upcoming movie Laal Singh Chaddha, directed by filmmaker Advait Chandan and adapted by noted actor Atul Kulkarni. The upcoming comedy-drama is an official remake of Tom Hanks’ 1994 blockbuster Forrest Gump. It is produced by Viacom18 Motion Pictures and Aamir Khan Productions. The film also stars Kareena Kapoor Khan, Mona Singh and Naga Chaitanya and is set to release worldwide on August 11.