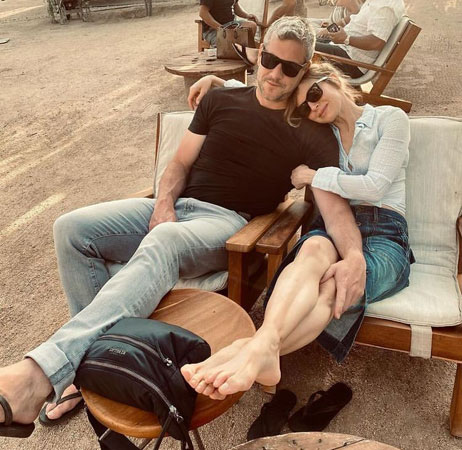 Ant + Ren = love! On July 10, Ant Anstead paid tribute to his girlfriend Renée Zellweger on his Instagram page. The British TV personality shared a photo of himself and the Oscar winner cuddled up on patio chairs while wearing matching sunglasses. He captioned the post, “This lady…Pure. Class. Ren x” Ant, 43, and Renée, 53, met on the set of his Discovery+ series Celebrity IOU: Joyride, which featured the Judy actress as a guest star. The series debuted in August 2021, a month after the couple unofficially went public with their relationship when they were photographed together on the balcony of Ant’s Laguna Beach, Calif. home. A month prior to their appearance, Ant finalized a divorce from HGTV star Christina Haack Hall, with whom he shares a two-year-old son, Hudson London Anstead. Ant also shares daughter Amelie, 18, and son Archie, 15, with his first ex-wife, Louise Storey. Renée has been spotted out with Ant and Hudson and has also met his older children in person. “They’d had a chance to meet many, many times on FaceTime,” the actress’ boyfriend told Us Weekly in January. “So it wasn’t a case of, ‘Hey, here’s someone new.’ It was all very organic.” Ant often posts pics of his kids on Instagram but rarely shares images of Renée, who does not have an official social media account.