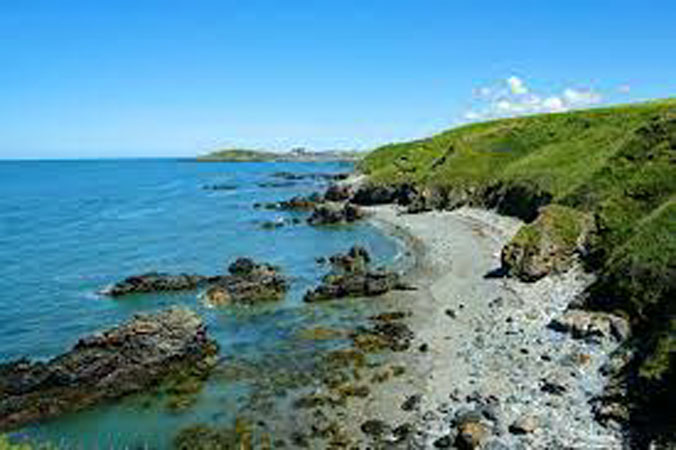 At the top of this ranking is the Isle of Anglesey, followed by Gwynedd, the Lake District and Scarborough The quietest time at the Eden Project is at weekends, as it’s ‘changeover time’, when people come and go Pembrokeshire’s sandy beaches are reminiscent of Cornwall’s minus the crowds

Which? Travel notes that last summer beachgoers in Bournemouth left behind 33 tonnes of rubbish.

In light of this, it offers a host of top tips to stop your break in Blighty being blighted by crowds, from amazing (and more tranquil) alternative destinations, including Pembrokeshire and St Andrews, to tips on the best times for visiting the top sights. If you’re dead set on a holiday in a hotspot, then pay close attention to Which? Travel’s list of the 30 places where holiday rentals fill up quickest – and get booking.

The Isle of Anglesey, has 2,094 listings on Airbnb and Vrbo, with an incredible year-to-year occupancy rate of 73.9 per cent.

The county of Gwynedd in Wales, has 5,152 listings and an occupancy rate of 71.7 per cent.

At the bottom of the ranking – so the least frenetic in terms of bookings – is Cambridge, with 3,141 listings and an occupancy rate of 60.4 per cent.

Surprisingly, says Which? Travel, the quietest time at Cornwall’s Eden Project is on sunny days and at weekends So, with the hotspot booked, now for an itinerary crammed with top sights. But when are the best times to go to them?

Which? Travel reveals that evenings are quietest at the historic Roman Baths in Bath and notes that there is late-night opening until 10pm in the school holidays in July and August.

Keen on Stonehenge in Wiltshire? Most coach tours arrive between 9.30am and 4pm in summer, so try to arrive before or after these times.

Kew Gardens in London is bloomin’ marvellous, but also bloomin’ busy. But if you become a member, says Which? Travel, you can enjoy the gardens from 8am between May and September, so that’s two hours to roam in tranquillity before the hoards arrive at 10am. Surprisingly, says Which? Travel, the quietest time at Cornwall’s Eden Project is on sunny days and at weekends, explaining that ‘as these are changeover days at campsites and holiday parks people are coming and going’.

Meanwhile, the British Museum in London, one of the country’s most popular visitor attractions, is best entered the hour before closing or early in the morning on weekdays. Which? Travel adds that the museum operates late-night openings most Fridays (last slot 7pm) – ‘a good opportunity to escape the masses’ – and offers out-of-hours tours. These cost £33 per person and run before general admission at 10am.

There is an alternative to busy Windermere in the Lake District – Wastwater, ‘a serene expanse of blue overlooked by Scafell Pike’

Which? Travel’s serene-staycation guide continues with the list of less obvious places to relax in and explore. Pembrokeshire, it says, is a calmer alternative to Cornwall’s coast.

The consumer publication says: ‘Pembrokeshire’s secret coves and wide, sandy beaches are reminiscent of Cornwall, minus the crowds. Not only will you enjoy a more serene break, our research found you could save £300 on a week’s hotel stay with this switch.’ There is a swap-option for Edinburgh, says Which? Travel – St Andrews

And want to avoid those queues in Snowdonia? Which? Travel says: ‘The Glyders, which look like castles formed out of rock, are a short hop away.

‘And the Brecon Beacons attract only half the visitor numbers that flock to Snowdonia each year.’

There’s an alternative to busy Windermere in the Lake District, too – Wastwater, ‘a serene expanse of blue overlooked by Scafell Pike’.

And there’s a swap-option for Edinburgh, too, says Which? Travel – St Andrews – while chocka Cambridge can be swerved in favour of Ely.

Of course, you could always avoid staycationing in the summer altogether and go away during the shoulder season – May to early June and September to October ‘are the sweet spots that still offer decent weather without the hordes’, says Which? Travel.