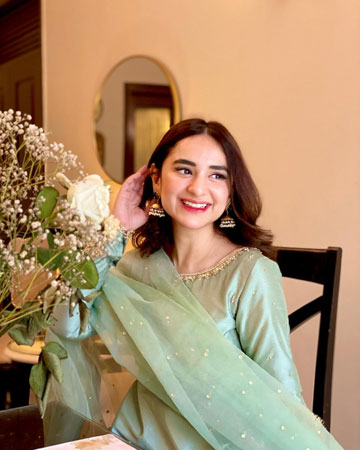 Lollywood’s talented powerhouse, Yumna Zaidi, makes a comeback with HUM TV’s latest drama serial Bakhtawar, playing the unconventional female lead in dual roles. The Inkaar actress’s first avatar is a feminine-looking girl, and the second one sports a boy cut and a deep voice. By the second teaser, Bakhtawar’s alter ego has gotten itself into a brawl with some dangerous thugs. Bakhtawar is the “journey of a young headstrong girl trying to escape her troubled home, difficulties and pain, and create a better tomorrow for herself.”

Zaidi will be playing the double role of a woman who dresses as a man to protect them from thugs. She looks fierce and stunning in that bob haircut. Her expressions, dialogue delivery, and immense beauty all come together to form a rare combination. Directed by Shahid Shafaat and produced by Momina Duraid, the drama has been written by Nadia Akhtar. The star-studded cast includes Zaidi, Zaviyar Nauman Ejaz, Saqib Sameer, Mizna Waqas, Noreen Gulwani, Shamoon Abbasi, Sunil Shankar, Huma Nawab, Adnan Shah, and others.

On the work front, Yumna Zaidi has been praised for her performance in the television series Ishq-e-Laa and Sinf-e-Aahan. Fans have responded positively to her performances. Yumna nails every character she plays, completely owning the character and immersing herself in it. The news shared by Zaidi was flooded by a number of actors with nothing but praises and love.