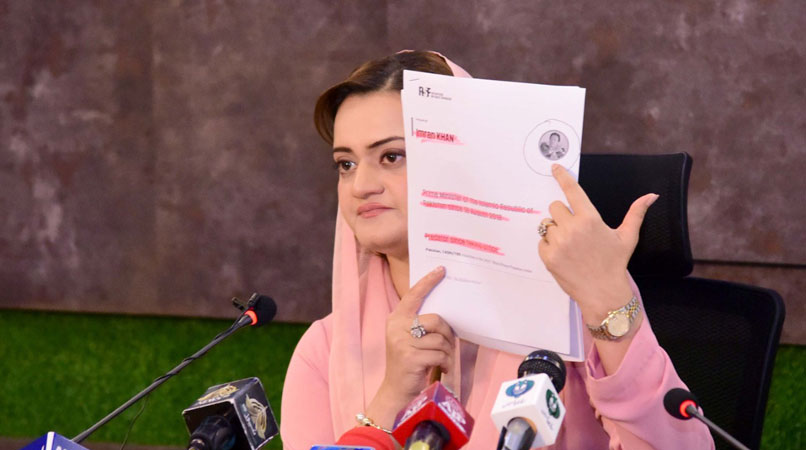 Federal Minister for Information and Broadcasting Marriyum Aurangzeb on Saturday said that the by-elections in Punjab would bury the narrative and politics of Pakistan Tehreek-e-Insaf (PTI).

“Today, Imran Khan admitted his defeat in his speech, the way Imran Khan was talking, it seemed that his language and mind were not under his control, and this only happens when a person is scared, defeated, rejected and failed,” she said while addressing a press conference here.

Taking a dig at the PTI chairman, she said Imran Khan was fully aware that these four things were in him, he had been rejected and failed, he had already lost the crucial bye-election. “The people of Punjab have declared war against the unemployment, inflation and economic destruction caused by Imran Khan who has given nothing but pain to the people in the country during four years”, she maintained.

She said that Imran Khan made all out efforts to push the country into a Sri Lanka like economic crisis. In the by-elections, the party will emerge victorious which always brought Pakistan out of economic crises and led it towards economic stability, she said.

The PML-N took steps to reduce inflation by taking people out of record inflation, and it was the only party that could overcome load shedding and it freed the country from the scourge of terrorism, broke the back of the terrorists and restored the peace. She said the PML-N brought the country’s growth rate to 6%, revived the ailing economy, and introduced the game-changing China Pakistan Economic Corridor (CPEC).

The minister said Imran Khan knew that his government failed to produce even one megawatt electricity during four years, and could not build even one kilometer of road, and only made false promises of ten million jobs and five million houses. He did not even build a university or a hospital during his tenure, which was the reason today he could not even mention a single achievement in his speeches.

Terming Imran Khan a habitual liar and a failed politician, she said he only knew the art of lying and misleading the masses. She said PML-N leaders Nawaz Sharif and Shehbaz Sharif entrusted the responsibility of election campaign for Punjab bye-elections to Maryam Nawaz who fulfilled the responsibility in an exemplary manner. She said according to the conditions and delimitation of constituencies in Punjab, the Pakistan Muslim League (N) had a clear edge there and owing to the wonderful campaign led by Maryam Nawaz, there was enthusiasm and spirit in the public meetings of PML-N.

Rubbishing Imran Khan’s claim that the media enjoyed complete freedom during his rule and there were no restrictions and censorship on the media, the minister quoted Reporters without Borders reports which stated that during the reign of Imran Khan, there were strict restrictions on the media. “Cases of brazen censorship are legion since Khan became prime minister. Newspaper distribution has been interrupted, media outlets have been threatened with the withdrawal of advertising and TV channel signals have been jammed. Journalists who cross the red lines have been threatened, abducted and tortured”, she said while reading the Reporters Without Borders report.

She said during the period of Imran Khan, restrictions were imposed on media institutions, channels were closed, there were threats to the lives of reporters, she quoted the report as saying and added that The Reporters Without Borders report was the “memoir of Imran Khan”. In the August 2019 report of Human Rights Watch, it was stated that the programs of TV channels were stopped, the programs of Capital TV, Geo News and other channels were stopped.She said if the reporters and staff of the channel did not stop the program, they would be attacked and this report of Human Rights Watch was available on the Internet. The report said that “Since the Imran Khan government, Pakistani media operated in a climate of fear”. In the February 2021 report of CPNE, it said that 10 journalists were killed and many were arrested in year 2020. Rejecting Imran’s lecture on freedom of expression during PTI rule, she said censorship was carried out in the country for four years by giving death threats to journalists through censorship and arm twisting and the journalist not obeying his orders were put in jail.

The minister saluted the journalists who stood firm during the Imran Khan dictatorial rule. Marriyum recalled that Imran Khan crushed his political opponents by sending them to death cells of prisons as soon as he came to power and contrary to his claim of freedom of expression cowardly Imran Khan blocked the voice of Nawaz Sharif and Maryam Nawaz on the TV screen, even their tickers were not allowed on TV screens.

When Shehbaz Sharif used to come to the court, Imran Khan would order the administration to speak so loudly on the loudspeaker that no one could hear Shehbaz Sharif’s voice, she said. During Imran Khan’s tenure, PFUJ organized protest demonstrations and demanded an end to the media gag and protests by journalistic organizations during Imran Khan’s tenure were part of the record and history.

Imran Khan was not afraid of fake news but his entire politics was fake, she said adding if it were about fake news, they would have brought a law on fake news, but they tried to bring a law to suppress the freedom of the media, which the present regime reversed. The minister said that when Imran Khan was in power, he took his political opponents off air from the TV screen, paralyzed all the state institutions, and made the Prime Minister House a hub for kidnappers to fulfill his political ambitions. Imran Khan only made baseless allegations against his political opponents in his four years but he could not prove even a single charge as all his claims were mere propaganda and no corruption, money laundering or misuse of power was done.

No former ruler ever used their family women for corruption like Imran Khan, who used his spouse Bushra Bibi for converting Bani Gala to Money Gala whereas Bushra Bibi used her front person Farah Gogi for corruption. The minister said Imran Khan gave lectures on honesty in such a way as if he was pious, but whenever he opened his mouth, he abused and threatened his political opponents. Talking about Imran Khan’s tirade against Election Commission, she said it was the outcome of the frustration after rejection of his request for a secret meeting with the Chief Election Commissioner. Moreover the PTI was attacking the ECP because the case of foreign funding had been reserved. Today they know that fair and transparent elections are being held in the country, now there is no Farah Gogi and Buzdar in Punjab who can help you win the election by corruption, Marriyum said.

She reminded Imran that unlike Daska by-elections, now his party did not have the power to pick up Election Commission staff along with ballot boxes to rig the elections but now they have indulged in vote buying tactics by getting identity cards of the voters as Imran Khan and his party were addicted to election theft and rigging.