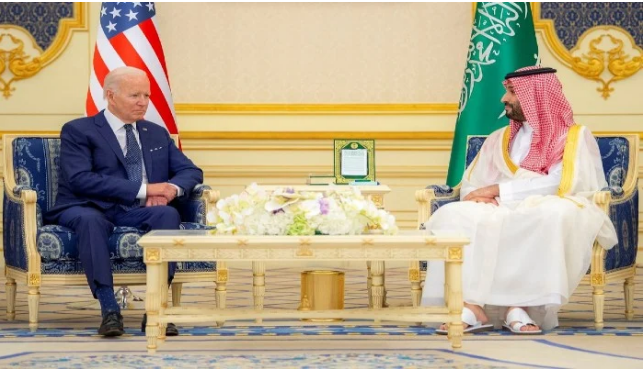 JEDDAH: US President Joe Biden said on Friday he told Saudi Arabia’s Crown Prince Mohammed bin Salman he held him responsible for the murder of Washington Post journalist Jamal Khashoggi, shortly after exchanging a fist bump with the crown prince.

On a trip to reset relations with a country he had called a pariah after Khashoggi’s killing in 2018, Biden said the crown prince, known as MbS, denied involvement in the murder and said he had held those responsible to account.

“With respect to the murder of Khashoggi, I raised it at the top of the meeting, making it clear what I thought of it at the time and what I think about it now,” Biden told reporters.

“I was straight forward and direct in discussing it. I made my view crystal clear. I said very straightforwardly, for an American president to be silent on an issue of human rights is inconsistent with who we are and who I am.”

US intelligence says the crown prince approved an operation to capture or kill Khashoggi, a Saudi insider-turned-critic, who was murdered and dismembered by Saudi agents inside the kingdom’s consulate in Istanbul. Biden said what happened to Khashoggi was outrageous.

“He basically said that he was not personally responsible for it,” Biden said of the crown prince’s response during their meeting. “I indicated that I thought he was.”

The president said they also discussed energy and that he expected to see action from Saudi Arabia, a major oil producer, on energy in the coming weeks.

As a presidential candidate, Biden had said the kingdom should be made a “pariah” on the world stage because of Khashoggi’s murder. He said on Friday he did not regret that comment.

With the body language being watched closely, at the start of Biden’s Middle East trip officials had said he would avoid close contact, such as shaking hands, as a precaution against COVID-19. But the president ended up engaging in hand-shaking during the Israel leg of the tour, too.

Biden’s interaction with the crown prince drew immediate criticism at home – including from The Washington Post and the Committee to Protect Journalists.

Khashoggi had been living in self-imposed exile in Virginia. The late journalist’s fiancée, Hatice Cengiz, posted a photo of the fist bump on Twitter and said Khashoggi would have written: “Is this the accountability you promised for my murder? The blood of MBS’s next victims is on your hands.”

Biden told reporters in Jeddah he was sorry she felt that way.

US reporters shouted questions about Khashoggi at the crown prince at the beginning of the meeting. “Will you apologise to his family?” one called out. MbS, with the Saudi energy minister seated beside him, did not respond and appeared to smile slightly as the reporters were led from the room.

Energy and security interests prompted Biden and his aides to decide not to isolate the Gulf oil giant, which has been strengthening ties with Russia and China, despite the president’s disgust over the killing. Biden wants to “recalibrate” Washington’s relations with Saudi Arabia and not rupture them, US national security adviser Jake Sullivan said.

The Saudi ambassador to Washington, Reema bint Bandar Al Saud, who was part of the Saudi greeting party, reiterated in an article for Politico the kingdom’s “abhorrence” of the killing, describing it as a gruesome atrocity, and said it cannot define US-Saudi ties.

Jeddah hosts a larger gathering of Arab leaders on Saturday.

Biden will discuss energy security with leaders of Gulf oil producers and hopes to see more action by OPEC+ to boost output, but there were unlikely to be any bilateral announcements from the talks, Sullivan told reporters en route to Jeddah.

“We had a good discussion on ensuring global energy security and adequate oil supplies to support global economic growth,” Biden said. “I’m doing all I can to increase the supply for the United States of America, which I expect to happen. The Saudis share that urgency and based on our discussions today I expect we’ll see further steps in the coming weeks.”

Saudi minister of state for foreign affairs Adel Al-Jubeir said there was no agreement made on oil and that Saudi and OPEC countries would make a decision based on the market, not “hysteria” or “politics.”

The OPEC+ group that includes Russia meets next on Aug. 3.

The United States and Saudi Arabia have reiterated their commitment to the stability of global energy markets, a joint statement carried by the Saudi state news agency, SPA, said.

The US is eager to see Saudi Arabia and its OPEC partners pump more oil to help bring down the high cost of gasoline and ease the highest US inflation in four decades.

Biden, who flew to Jeddah after visiting Israel, also touted a pair of Saudi moves widely seen as signs of a gradual thaw between Israel and Saudi Arabia. Riyadh agreed to allow more over flights of its territory from Israel, which Biden said he hoped would lead to broader normalization of relations.

He also announced a US-brokered deal between Israel, Egypt and Saudi Arabia under which a small US-led international peacekeeping contingent will leave the strategic Red Sea island of Tiran.

Cairo ceded control to Riyadh in 2017. Israeli approval was required for any change in the security arrangement there, and lengthy and complex negotiations were required to seal the deal because of the lack of Israeli-Saudi diplomatic relations.

Biden was the first American president to fly from Israel directly to Jeddah. Ahead of the visit, Saudi Arabia said it would open its airspace to all air carriers, paving the way for more over flights to and from Israel, in what Biden described as a historic and important step toward building a more integrated and stable Middle East.

The United States and Saudi Arabia agreed on the importance of stopping Iran from “acquiring a nuclear weapon” during the Biden visit, a joint statement carried by the Saudi state news agency (SPA) said.

The statement said Biden emphasized his country’s strong and enduring commitment to supporting the security and defence of the oil-rich kingdom.

The two countries also stressed the need to prevent Iran from interfering in internal affairs of countries, supporting terrorism through its affiliated armed groups, and destabilising the security and stability of the region.