The glorious British trains that never go on strike! 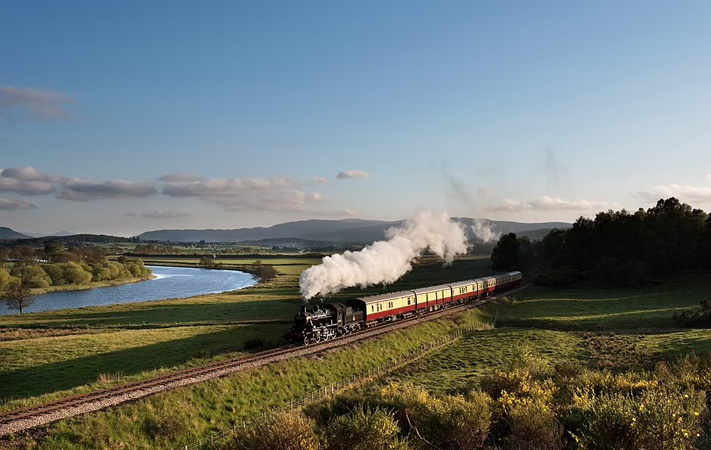 Britain has more than 120 ‘preserved’, or heritage, railways. They vary in length from a mile to 30 miles, and each is a portal into the past.

Often the theme is 1940s, so the preserved stations tend to bristle with posters proclaiming ‘Dig for Victory’ or ‘Careless Talk Costs Lives’, so prevalent during World War II, but some will take you back to the 19th century, others the 1970s. Half a billion pounds per year is contributed to the economy. Most operate between March and October; many are also open over the Christmas holidays.

In 1935, when the Lynton & Barnstaple Railway in Devon closed, a wreath was laid at Barnstaple station bearing the words, ‘Perchance it is not dead, but sleepeth.’ (And the L&B is currently being reopened in stages.)

The first line brought back from the dead was the Talyllyn in North Wales, closed in 1950, re-opened in 1951, after a campaign by railway author L.T.C. Rolt. In the 1960s, branch line closures by the railway ‘axeman’ Dr Beeching, and the ending of steam traction by British Railways, created a demand for what had been taken away, and many of the lines have been reopened by preservationists.

All the lines survived the pandemic, and the Heritage Railway Association (celebrating its 60th anniversary this year) expects this season to be ‘really strong’. The preserved railways are not part of the national network, so you can’t book tickets on Trainline, but most of their websites facilitate booking. Most of the railways operate a ‘rover’ ticket enabling you to go up and down their route all day, and these – the simplest ticket option – vary between about £10 and £35, depending on the line length. It’s easy to spend a whole day on even the shortest lines, some of which, it must be admitted, don’t really go anywhere. The trains tend to amble (max speed 25mph), and it’s hypnotic to watch clouds of steam from the engine floating back past the carriage window, while listening to the di-dum di-dum rhythm of old-fashioned jointed (as opposed to seamlessly welded) track. But there are also spin-off attractions: bookshops, cafes, museums. Many lines are offering ‘kids for a quid’ to tempt families back. Whole compartments can often be reserved, and part of the lines’ charm is the availability of this more intimate form of accommodation, with buffet or restaurant cars other reminders of a more civilised era of train travel.

The North Yorkshire Moors Railway (pictured) is particularly beautiful in late summer, when the heather is purple and the ferns are fading to brown

The prettiest branch lines tended to be the most uneconomic, so they were often closed – and have often been reopened.

The North Yorkshire Moors Railway is particularly beautiful in late summer, when the heather is purple and the ferns are fading to brown, colours that complement the mellow, tawny-hued interiors of the line’s vintage wooden carriages. In Wales, the Ffestiniog Railway and its sister line, the Welsh Highland, have a harmonious relationship with the Snowdonia National Park, through which they run. All the best photographs of the wide, sweeping Vale of Ffestiniog are taken from the train, and as the Welsh Highland engines run through the great gorge of the Aberglaslyn Pass, you’d think you were in Switzerland.

The hub, or hinge, of the two lines is at Porthmadog, and a weekend there permits a day devoted to each line.

The wide windows of the carriages on the Strathspey Railway in the Scottish Highlands offer a cinematic experience.

The line has the Cairngorms in view for much of the time, usually part-shrouded in a mysterious fog.

‘There are about six types of weather going on there at once,’ a steward on the train told me.

He had a faraway look as he gazed in that direction, but the tea and fruit cake served were excellent. The EO runs regular Ale Trains, in which locally brewed real ale is dispensed from the barrel in their Pig and Whistle mobile bar.

And there’s no need for a designated driver, since the railway is connected to Epping Tube station by 1950s Regent type double-decker buses. After a good evening on the Ale Train, the conductor’s ‘Mind how you go!’ as you disembark is said in earnest.

The Dartmouth Steam Railway in South Devon runs along part of the English Riviera (a term invented by the Great Western Railway in 1904) and the Dart Estuary.

If you watch the trains while standing in the sea at Goodrington Sands, they seem to be skimming over the roofs of the beach huts.

The 23-mile West Somerset Railway was built in the 1860s and skirts the sea on its way from Bishops Lydeard to Minehead.

On summer Saturdays in Minehead, everyone in town seems to be coming and going from the WSR station which, with its bunting and flower baskets would be evocative of inter-war holidays even without the green and gold ex-Great Western locos. Most preserved lines celebrate the charisma of steam locomotives – ‘the most sensitive thing man ever made’, wrote Mark Twain – but there are some diesel specialists, including the Mid-Norfolk Railway.