* The chef, Aniwat Khotsopa, was raised in the Isan city Udon Thani and is a gifted manipulator of his home region's textural depth and contrapuntal flavors 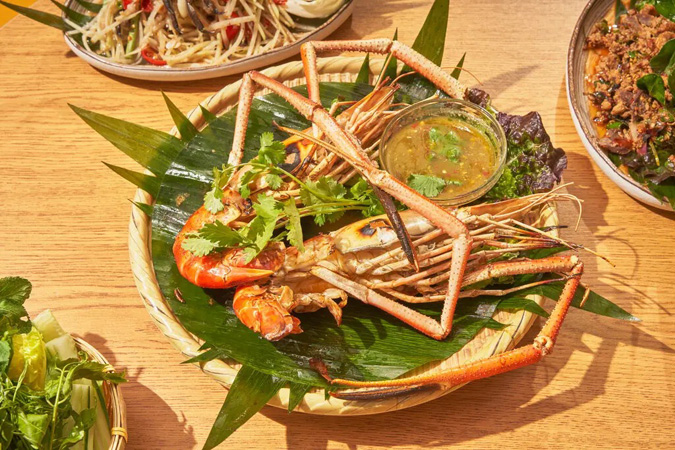 There have been important exceptions, like the northern Thai specialist Lamoon, in Queens, which closed recently after the cost of importing red-ant eggs and other hard-to-find ingredients skyrocketed, and the pan-regional Ugly Baby, which is still gleefully setting its customers’ faces on fire in Brooklyn. Take a few steps back, though, and you can see a clear trend line inclining toward the larbs packed with offal, papaya salads bristling with salted black crabs, and bundles of sticky rice that mark the cooking of Thailand’s northeast.

That trajectory reached a new high point with the arrival in April of Zaab Zaab in Elmhurst, Queens.

His version of larb ped Udon, the minced-duck salad that is a favorite of his hometown, is forceful and nuanced at the same time. To the little pebbles of duck meat he adds crunchy slivers of fried duck skin and chewy, dense slices of duck liver. Roasted chiles are used in abundance but they don’t upstage the other seasonings, as they sometimes can. Instead they are held in a tense balance by the freshness of mint and charred galangal, the floral perfume of lime leaves and the pungent bitterness of sawtooth herb, also known as culantro. 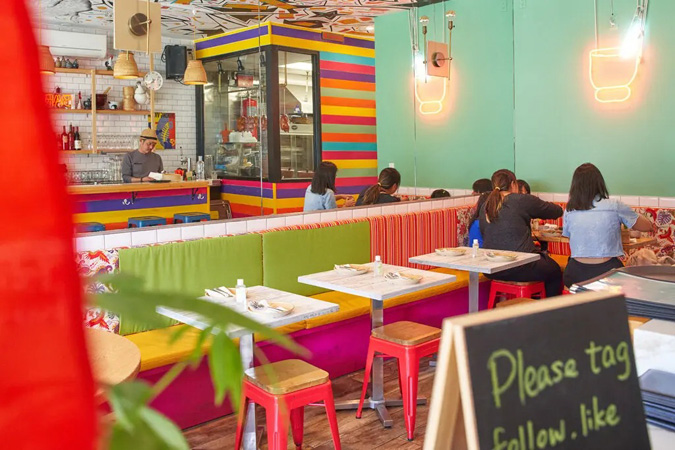 Cooks often talk about the balance of hot, sour, salty and sweet flavors in Thai food; Mr. Khotsopa makes a convincing case for adding bitterness to the list. Like the other larbs he makes with beef, pork or chicken, the larb ped Udon can and should be made into mouth-size bundles with greens from a basket of lettuce and herbs. Along with sprigs of mint, cilantro and dill – Zaab Zaab makes terrific use of dill – is a branch with long, thin green leaves shaped like the blade of a spear. This is sadao, and just one leaf will add a melancholy note of bitterness that makes the other herbs even more refreshing. Pei Wei, who owns the restaurant with Bryan Chunton, stopped by my table one night to point out the sadao and some other ingredients that she said require some lengths to procure. Many customers come from Thailand, she said, and this helps show that Zaab Zaab is the real thing. There is a lot of competition, after all, from other very good Thai spots along Woodside Avenue and Broadway. The coalescence of a restaurant corridor serving one of the city’s largest Thai communities was almost certainly a precondition for the emergence of a kitchen as accomplished as Zaab Zaab’s. Mr. Khotsopa was working as a line cook at another restaurant owned by Ms. Wei and Mr. Chunton, Tiger Prawn in Brooklyn, when a chicken larb he cooked for a staff meal got their attention. The partners built Zaab Zaab for him by quickly retrofitting a space where they had recently run a Hainanese chicken restaurant.

This explains the preponderance of chicken heads in the ceiling mural. (It is the work of a local Thai-born artist named Sarasin Chatwichitkoon, who painted several other restaurants on this strip.) Mr. Khotsopa has been waiting for a coach to call him up from the minors for some time; he spent a decade as a wok cook at Jaiya Thai in Manhattan and another decade at a luxury hotel in Bangkok, with shorter stints elsewhere in Bangkok and at a Thai restaurant in State College, Pa. Before Zaab Zaab, though, he had never worked as the chef or cooked a predominantly Isan menu.

You know you are in the hands of a skilled chef when you see how many techniques Mr. Khotsopa nails in his fairly small kitchen. From the grill comes goong pow, two prawns as big as Italian sausages, their heads dripping with marigold-colored fat that I would happily spread on toast and eat for breakfast.

They are served with a tart, herbaceous nam jim, one of many glittering, faceted gems in Mr. Khotsopa’s repertory of sauces. Nuer yang, the grilled steak dish known as crying tiger, is made with rib-eye and comes with two kinds of the dipping sauce jaew, one tart and slightly spicy, the other darker, with an espresso-like bitterness.