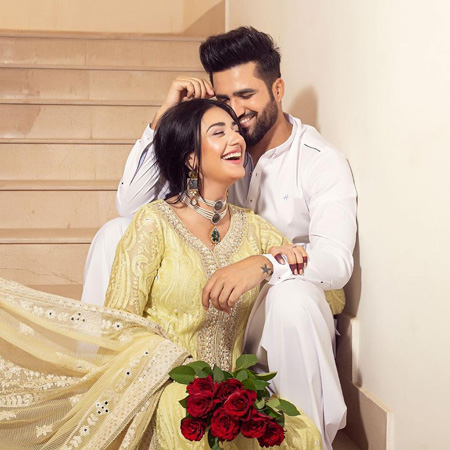 Singer Falak Shabir has social media gushing with his birthday surprise for his wife Sarah Khan in the viral video. The renowned singer and husband of A-list actor Sarah Khan, took to his Instagram handle Thursday night to share a short clip of his grand surprise for the actor’s birthday. The video sees Falak Shabir keeping up with his rose ritual, as he brought a special red flower and gave it to the birthday girl while singing a birthday wish in his melodious voice.

Khan also had a red heart-shaped cake in front of her with some matching balloons at the back as a part of the birthday celebration.

“Begum happy birthday to you,” the singer penned in the caption of the viral video on the photo and video sharing application.

The snippet watched by thousands of users of the social application garnered several hearts and birthday wishes for the ‘Tumhare Hain’ actor.

Khan also turned to his account on the social platform and acknowledged Shabir as well as her siblings for the birthday celebration and lovely gifts. Moreover, Mrs Falak also thanked her daughter Alyana for ‘peacefully sleeping throughout the time’ so the couple could enjoy the celebration and the meal that followed.

The beloved celebrity duo Sarah Khan and Falak Shabir never fails to set couple goals with their gestures and love for each other. The two with quite a fan base on the social platform, frequently share family glimpses and heart-melting videos of baby Alyana with the fans.

For those unversed, the celebrity couple got married in July of 2020. They welcomed their first child – baby girl Alyana in October last year.