Saba Qamar never wanted to see me work from day one: Meera Ji

* To this, Meera responded, 'From what I know, I don't think Saba even wants to see me work from day one' 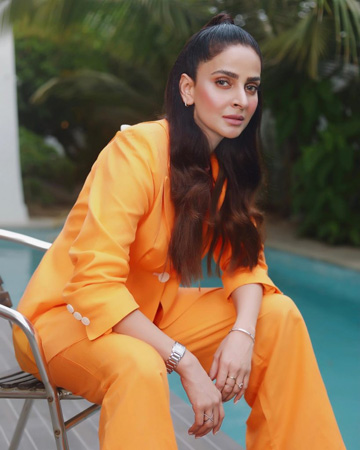 Veteran actor Meera, while appearing on a recent talk show, commented she has heard from several industry insiders that Saba Qamar often badmouths her.

Responding to a question from an attendee of the show, the Baaji star was asked whether she considers the Baaghi star her best friend in the entertainment industry.

To this, Meera responded, “From what I know, I don’t think Saba even wants to see me work from day one. That I even get a project. There are many in management who claim that Saba often badmouths me and that she doesn’t like me. They also share that if there is ever an offer of being cast with me, she brushes it aside.”

At this, the host interjects and comments how this could just be hearsay. “Yes, but why does everyone say the same thing?” Meera remarked. “I have made a vow to not keep anything in my heart and I just want this out in the open as well. I have overheard many talk about this. I have never heard Saba herself say anything against me. The people who tell me that she doesn’t like me are the same people she holds near and dear. Why would they lie?”

The actor then commented how she had previously shared screen space with Saba, Main Sitara. “We had amazing onscreen chemistry, we worked so well together, we gelled well. A lot of people watched that drama, everyone really liked it as well. I received calls from India as well, where many praised our work.”

Saba, who was oblivious to Meera’s claims, expressed shock when someone asked her the same question in an Instagram Q&A. “Wait, what?!” she responded.

In 2015, Meera called out Mahira Khan as well, claiming the Verna star had campaigned against her. “Mahira Khan replaced me in a major project by Momina Duraid – she literally took that project away from me,” claimed Meera in an interview with The Express Tribune in 2015.

Although she did not disclose the name of said project, Meera justified her statements further by accusing Mahira of campaigning against her. “Even I have met many Bollywood celebrities, including Shah Rukh and Gauri Khan and Karan Johar. In fact, SRK even offered me a film,” said Meera. “But because of Mahira’s campaign against me, I lost all my projects in the Indian industry and she got one”.

Three years later, Meera offered an olive branch to Mahira and lauded the Raees star on social media. Meera spoke of the responsibilities that come along with fame. She tweeted, “One of the women I admire – Angelina Jolie – said that when someone has a lot of fame, they also have a responsibility to give back to society. Otherwise, the popularity is of no use.”

The star continued, “I applaud Mahira Khan and Aamina Sheikh for their initiatives and working with Afghan refugees. Especially children and more so, with girls.”