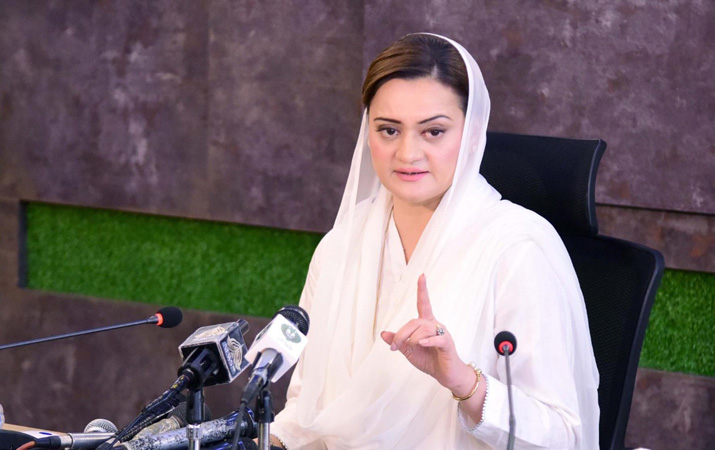 The Federal Cabinet Friday formed a special committee to suggest legal action against the “transgressors of the Constitution” in light of the apex court’s decision on the April 3 ruling of the then National Assembly deputy speaker Qasim Khan Suri rejecting the no-confidence motion against the then prime minister Imran Khan.

The committee, headed by Law Minister Azam Nazeer Tarar, and comprising ministers for information and interior along with representatives of all the coalition partners, would present its recommendations to the cabinet in its next meeting, Minister for Information Marriyum Aurangzeb said in a news conference after the cabinet meeting. The minister said the cabinet members had unanimously approved a resolution which welcomed the Supreme Court’s verdict on Qasim Suri’s “unconstitutional” ruling.

“The detailed decision of the SC, based on the supremacy of the Constitution, is commendable, as it has buried the ‘doctrine of necessity’. It is an indictment of the previous government and those who held constitutional posts at that time. It has been proved that the last regime had violated the Constitution,” she said while reading aloud the resolution.

The resolution pointed out that the deputy speaker’s ruling against the no-trust motion was termed “unconstitutional”, while the National Assembly’s dissolution was declared “null and void”, the minister added. The verdict, she said, had made it clear that the “narrative of regime change under a foreign conspiracy” was fabricated, false, and baseless. The resolution also mentioned that the previous government made serious efforts to damage economic security and national interests on the foreign front and that too just out of the then rulers’ “lust for the power”. It was noted that the honorable court had rightly pointed out that if it (regime change conspiracy) was such a grave matter then why the Imran Khan government did not take any action and rather remained silent over it, the minister stated.

The entire cabinet was unanimous that the nation would have to decide collectively that no one should dare attack the parliament and democracy, and deprive the masses of their right to rule in future, she said, while terming the apex court’s decision a major milestone in that regard. To a query, the minister said the names of Pakistan Tehreek-e-Insaf (PTI) leaders, who had disrespected the constitutional offices were mentioned in the apex court’s decision. Marriyum said the cabinet also discussed the matter related to Tayyaba Gul, who had lodged a complaint on the Citizen Portal, seeking justice for alleged “sexual abuse” and “sexual harassment” by former National Accountability Bureau chairman Justice (retired) Javed Iqbal.

Instead of addressing her complaint, the minister alleged, the former rulers abducted her and kept her hostage in the Prime Minister’s House for 18 days. All the evidence collected from Tayyaba Gull was used by the PM Office to blackmail and pressurize the former NAB chairman for victimizing the political opponents of Imran Khan. Not only the highest office of the country was misused, but also an institution was compromised just to achieve political benefits, she added. Keeping the details in view, the minister said, the cabinet decided to form an independent and impartial inquiry commission under the Commissions of Inquiry Act, 2017 to probe the Tayyaba Gull harassment case. A draft of its terms of reference (TORs) was also discussed in the meeting.

The law minister was tasked with finalizing the ToRs and suitable names for the commission’s head in consultation with the cabinet’s committee, she added. Marriyum said the commission would be bound to complete the investigation into the matter within a specific time frame, which would be approved by the cabinet.

She regretted that the PM Office and the Citizen Portal were used for blackmailing, while no action was taken on the complaint of the woman. She said the complaints of women against Javed Iqbal were also received from the Commission of Inquiry on Enforced Disappearances, which was also headed by him. Those complaints would also be sent to the said commission.

At the outset of briefing, the minister said the cabinet discussed the flood situation across the country and directed the National Disaster Management Authority (NDMA), provincial disaster management authorities (PDMAs) and provincial governments to remain vigilant to deal with any emergency situation. The cabinet offered Fateha for the souls of those who had lost their lives during the recent floods and directed that compensation should be provided to their affected families at the earliest after a joint survey by the NDMA, PDMA and respective provincial governments.

The minister said rescue and relief efforts of all agencies, including Pakistan Army, police, PDMAs and NDMA during the natural disaster were appreciated. The cabinet also directed all aid agencies to remain active in the field to ensure protection of life and property of the people. She said following the recent reduction in fuel prices in the global market, the prime minister announced a cut in the per liter price of petrol by Rs18.50, diesel by Rs40.54, kerosene by Rs33.81 and light diesel by Rs34.71.

The cabinet, she said, directed for monitoring to ensure reduction in the public transport fares so that commuters could get the maximum benefit of decrease in the prices of petroleum products. The present government had to take tough decisions after coming to power, but now it was passing the benefit of the commodities’ decreasing prices on to the people, she added.

“The reduction in fuel prices is a continuation of the promise made by Prime Minister Shehbaz Sharif to the masses,” Marriyum maintained. The former government, she said, had reached an agreement with the International Monetary Fund (IMF) on weak grounds and strict terms. The former rulers had in fact laid economic mines for their ulterior political objectives. “When he (Imran) learned that the no-confidence motion against him would be successful, he violated the IMF agreement, which had not only resulted in an economic catastrophe but also put the country’s stability at stake,” she remarked.

The minister said the present government with sheer hard work had revived that agreement and at the same time presented a pro-poor budget in which the common man was given relief. The country was now on the path to economic independence. She said PM Shehbaz Sharif congratulated his cabinet members on the successful agreement with the IMF and appreciated the efforts of Finance Minister Miftah Ismail and his team, and also hailed Foreign Minister Bilawal Bhutto Zardari and his team for providing their full support in that regard. The prime minister hoped that it would prove to be the last IMF agreement for Pakistan as self-reliance and economic self-sufficiency should be the goal, she added.

In 2015, she said, the Nawaz Sharif-led Pakistan Muslim League-Nawaz government had completed the IMF programme and by the grace of Allah, the present regime would also complete the programme as well. The cabinet, on the recommendation of the Interior Ministry, approved an amnesty scheme for foreigners residing in Pakistan beyond the stipulated period, she said, adding many people had been arrested for overstay but fines were so high that they could not pay.