Tense calm in Karachi as ethnic tensions flare up 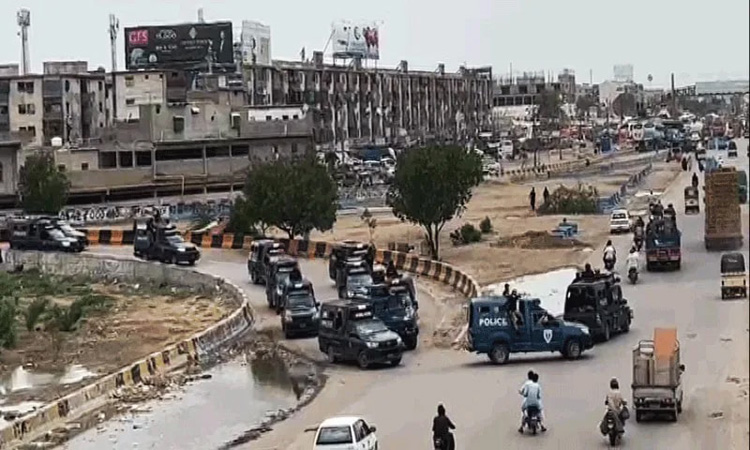 A tense calm reigned parts of Karachi on Friday after some ethnic groups gave a call for strikes to protest the killing of a 35-year-old man in Hyderabad and a violent demonstration in Sohrab Goth following the incident.

On Tuesday, Bilal Kaka was killed and five of his companions were injured in a scuffle at a hotel in Hyderabad. The incident drew a violent reaction from the nationalist parties, who believed the attackers were Afghans.

Several political parties, including JI, MQM-Pakistan, Awami National Party, and nationalist leaders Jalal Mehmood Shah and Ayaz Latif Palijo issued statements, urging both Sindhis and Pakhtuns – the two groups at the heart of these tensions – to demonstrate restraint. They also demanded the government take prompt action to defuse the tensions.

On Friday, commercial activities remained suspended in several localities of the metropolis where police and other law enforcers carried out flag marches to maintain law and order. However, after Friday prayers, protests were reported in Sohrab Goth where the police detained some people.

City police chief Javed Akhtar Odho said some people tried to torch an old vehicle near Sohrab Goth and damaged other property. However, he said, the police took immediate action and detained around 10 to 15 people.

He said over 45 persons had been arrested on charges of rioting and arson since Thursday evening.

Separately, the Sohrab Goth police have registered a case on behalf of the state against four identified suspects and 1,500 to 2,000 unidentified ‘miscreants’ on charges of allegedly killing two people and injuring two others, says a news report.

The complainant, a police officer, said he along with other officers, including SHO Sohrab Goth Zubair Nawaz, was patrolling and when they reached Malik Aga Hotel at around 4:30pm they allegedly saw four men, identified as Naimatullah alias Adil Shah, Shafiullah, Jamil Alkozai, and Riaz Khan, chanting ‘provocative’ slogans drawing the attention of the people towards the incident that had happened in Hyderabad. When the police saw that other people had also started gathering there, they immediately called for reinforcement and 140 tear gas shells to meet any eventuality. Meanwhile, the emotionally-charged crowd started gathering at the Afghan Cut near Superhighway and allegedly instigated others for riots.

They started pelting stones and erected temporary barriers on the main highway, resulting in a massive traffic jam. Some of the protesters were allegedly armed while others were carrying sticks, iron rods, and stones. The FIR stated that the demonstrators started ransacking the Karachi bus terminal at around 4.45pm. They overpowered two police officers deployed there for security and allegedly snatched an official pistol from ASI Mohammed Azam. An official SMG was also allegedly snatched from the police mobile patrol.

The miscreants then allegedly open fire at the police officers after which they responded with tear gas shelling in a bid to disperse the crowd. The complaint also said the miscreants allegedly snatched valuables from commuters and pedestrians and caused substantial damage to public and private property. The FIR stated that when the police reached Taj petrol pump, it received information that two people had been shot and two were wounded by gunfire carried out by the miscreants. All of them were shifted to Abbasi Shaheed Hospital and DUHS respectively.

The police arrested 14 suspects and recovered iron rods and stones from their custody and dispersed the miscreants who fled towards different areas. On the other hand, Sindh Chief Minister Murad Ali Shah has ordered the police to ensure that no road was closed in Karachi and take a strict action against anyone who harmed public or private property.

“If any miscreants tries to block any road, they should be dealt with severely,” he was quoted as saying, adding that the government had discussed the ongoing tensions with the “concerned parties”. Meanwhile, Sindh Minister for Information Sharjeel Memon Friday warned that the government won’t let miscreants and mischievous elements spoil peace and urged people not to support such groups.

“Pakistan is a bouquet and all the people living here are brothers except for some groups that are instigating hatred,” he said in a press conference. “There are some mischievous elements that are trying to create a division and hatred among people,” Memon said, adding that a “political party, which has a government in only one province is further trying to instigate the violence”. “I have pictures and videos here with me to prove this,” he said. The minister said that anyone who wanted to “create a mess in Sindh” would be dealt with “with iron hands”. “Sindh is the land of Sufis. It is the land of peace and we will make sure no one disrupts it.”

He added that the government won’t tolerate any “fake news” circulating on social media and advised people to refrain from believing “unverified news”. “We have noticed these groups are using the accounts of people who aren’t even alive anymore just to mislead the people,” Memon said, warning that the government would be launching a crackdown soon. He did not specify who he was referring to.

Memon said 28 people were taken into custody for forcing people to shut restaurants across the province. He added that the Federal Investigation Agency (FIA) will initiate an investigation against all those who will pass negative comments on the social media to ignite hatred.

Accusing the PTI of being involved in the incident, he said people who were protesting in Sohrab Goth were seen carrying Afghan flags during the riots. “A person contesting election on PTI’s ticket is the brother of the person who is carrying Afghanistan’s flag,” Sharjeel said, sharing the pictures with journalists. Earlier in the day, Sindh Governor Agha Siraj Durrani met a 19-member delegation of the Pakhtun community. He assured them that the government was taking all necessary measures to control the situation in the province.

“We won’t allow any conspiracy sabotage the peace of the province,” he said. Sindh Energy Minister Imtiaz Sheikh contacted ANP’s Shahi Syed and Riaz Chandio of Jiay Sindh Mahaz, seeking their support to control the situation. “Everyone is requested to remain peaceful and avoid taking the law into their own hands,” Sheikh said, adding Sindh is the land of Sufis who always taught love. In response to the call, ANP President Shahi Syed appealed to the people to remain peaceful. “We are in contact with the government and no injustice will be meted out to anyone.” “All illegal immigrants from Afghanistan, Burma, Afghanistan, Bangladesh, and Iran will be sent back,” Qaumi Awami Tehreek chief Ayaz Latif Palijo said, adding that this was what entire Pakistan wanted.