Is Fahad Mustafa the new it cop? Fans are all praises for ‘Quaid-e-Azam Zindabad’ 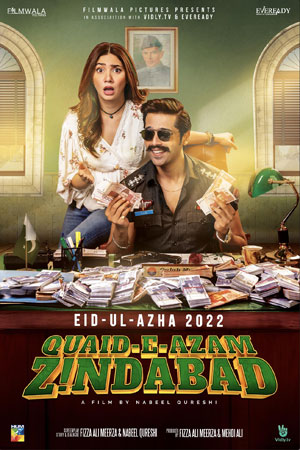 Have you seen Quaid-e-Azam Zindabad yet? Pakistan has its very own cop movie with Fahad Mustafa in the lead and it is ruling people’s hearts. Salman Khan who?

Every year, Eid is made more exciting with the line of films releasing on the occasion and this year Quaid-e-Azam Zindabad is one of them. Starring Mustafa and Mahira Khan, the trailer tells the story of a police officer who earns through illegal means but gets a spiritual awakening midway through the story and realises his patriotic duty.

Pakistani Twitter is all praises for the film, enough to get the Jeeto Pakistan host trending and he is grateful for the hype.

Netizens are calling it a “must-watch movie”. They are particularly impressed by Mustafa’s stunts, calling them Hollywood-esque. For those who are comparing it to Bollywood, fans want you to know it’s a unique storyline that stands out.

They think Pakistani movies should be promoted instead.

Fans are taken by Mustafa’s role as a “big screen hero”. Netizens think it’s a “balanced” masterpiece with a “strong message”. Which Eid release have you watched?