Ushna is no more single

* The beautiful, vivacious, talented and daring Ushna took to Instagram to reveal that she is no longer single 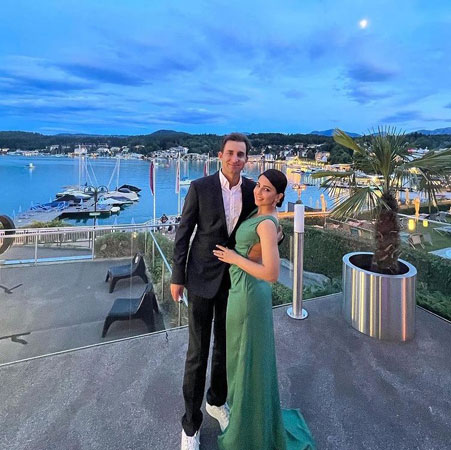 Ushna Shah is always on the move to enchant her followers, whether it’s through her contributions to the showbiz industry or jaw-dropping content on social media.

However, this time she stunned her fans by revealing for first time the man of her dreams on Instagram that left many heartbroken while congratulation continued to pour in.

The beautiful, vivacious, talented and daring Ushna took to Instagram to reveal that she is no longer single. She shared her intimate pictures with pro-golfer Hamza Amin.

“Could you be my escort cause just like them two door Fords, damn they don’t make em like you no more,” she wrote with love emojis.

“Found a Mäuschen, took her to Velden @ushnashah,” he wrote.

“My huckleberry friend,” Ushna commented on the post. Hamza is a professional golfer of and the son of Taimur Hassan Amin, Chairman of the Asia Pacific Golf Federation. The 34-year-old’s professional profile shows that he is an Austrian-Pakistani golf professional who plays for Islamabad Club and plays on Asian Golf Tour.

Educated in Austria, Hamza Amin managed to get noticed at the university level and represented his alma mater in competitions at the continent level. After attaining success as a National Amateur Champion in 2011, he turned professional in 2012. Ever since his performances at the national level have been noticeable and he enjoys the No. 6 ranking on the Professional Golf Circuit of Pakistan.

In the Austrian Open Golf Championship 2022 at Altenann Golf Club Golf Course in Salzburg, Hamza gained ascendancy over his consummate and worthy rivals through dexterous and accomplished application of golfing skills. The resolute effort enabled him to compile four rounds scores of a steady 74 in the first round, remarkable rounds of 69 and 67 on the second and third days and finally, a 71 on the final day. His aggregate for four rounds was a stirring total of 281, seven under par and that placed the professional championship in his lap along with a pocket-filling prize money cheque of 6,000 euros.

Ushna’s industry friends and fans congratulated her with some heartbroken people in there.